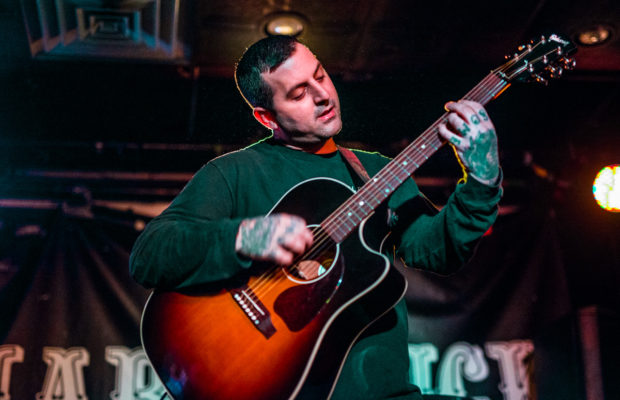 On Wednesday, November 28th, Toronto’s Hard Luck Bar filled with anticipated patrons, excited to see New York Punk Rocker’s Bayside perform a mellow, acoustic set with special guest Kayleigh Goldsworthy. Doors opened at 7:30 and fans quickly shuffled in from the cold, filling the venue up quickly. Kayleigh hit the stage right at 8:30 wearing a bold and beautiful red outfit that made her pop on stage. She greeted the crowd with a warm smile and charmed her way into our hearts with her beautiful voice. She performed stripped down versions of songs from her new EP “All These Miles” and was absolutely captivating to watch.

The crowd buzzed with anticipation as they waited for the stage to clear for Bayside. Some concert-goers had come from as far as Buffalo just to see them and you could tell everyone was excited. As soon as they took the stage the crowd cheered and whistled with delight as they opened up their set with ‘Moceanu’ which had the crowd swaying back and forth. An overwhelming sense of calmness sweeping over us through the Na Na Na’s and into ‘Devotion and Desire’ then ‘Howard’. In such a small venue, this performance felt incredibly intimate and the acoustics in the venue allowed for the crowd’s voice to be heard singing along to every word.
The tour comes on the coattails of Bayside’s latest release, Acoustic Volume 2, that came out in September. They’re on the road until December 16th then again in the New Year! Be sure to grab your tickets as many dates are already sold out! Trust me, you won’t want to miss seeing Bayside in such an intimate setting.