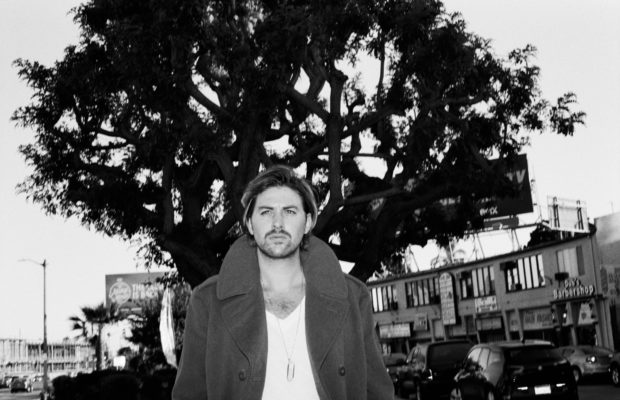 English blues/rock musician Jamie N Commons was born in Bristol, England but moved with his family at 6 years of age to Chicago.  His father had a love for American culture, a love and fascination he passed on to Commons through road trips they took throughout the South.  It was in Chicago that Commons fell in love with music, more specifically the blues, albeit from non-traditional influences.  Commons moved back to England at the age of 16 and learned to play the guitar, moving to London when he was 18 to study music at Goldsmiths in New Cross.  He quickly garnered plenty of critical praise for his deep, raspy, gritty voice, drawing comparisons to Johnny Cash, Leonard Cohen and Tom Waits. At the age of 22 released his first EP, The Baron, which caught the interest of Grammy-nominated British producer Alex Da Kid, who decided to sign Commons to his KIDinaKORNER label, a subsidiary of Interscope Records.  In 2013, the label released Common’s second EP, Rumble and Sway, which reached number 21 on Billboard’s Top Heatseekers Chart.  That year also saw his track “Lead Me Home” included on the soundtrack for the popular TV show The Walking Dead, as well as a collaboration with X Ambassadors on the track “Jungle”.  His music has been featured in several other movies and tv shows, as well as at the 2014 FIFA World Cup and the WWE.  Commons has found himself writing more for movies and television recently, having composed the score for this past summer’s blockbuster Skyscraper starring Dwayne “The Rock” Johnson.  His latest single, “Paper Dreams”, has an ’80s synth pop vibe that is a departure in sound for him.  Although he has previously leaned heavily on the blues and rock, he has recently developed the desire to pursue more of a pop sound.  He recently moved to LA to pursue his songwriting career and has some exciting things in the works.  Staff writer Emily May spoke recently by email with Commons about his upcoming debut full-length album, working with Alex Da Kid and his changing sound.  You can stay up-to-date with Commons and all upcoming music and tour dates, as well as stream and purchase his music, via the following links.  Check out his video for “Paper Dreams” below.

You lived in Chicago for 6 years as a child when your dad relocated there for work. He was a lover of American culture and he drove you around the American south in a van, traveling from town to town and visiting every landmark. What was that like for you as a kid? Did you have the same fondness for American culture as your father? What were some of your favorite places/landmarks that you visited?

I mean its funny cause when I’m out on tour it almost feels like I was in training as a kid haha. No I very much have the same bug as my dad. I have an obsession with American culture, architecture, food, and of course music. I remember the first time visiting New York as a child… the buildings were just so impossibly big! I remember my neck hurting from just walking round looking up the whole day.

When you moved back to the UK, you taught yourself guitar and honed your talent alongside then-rising musicians Mumford and Sons and Laura Marling at open mic nights. What kind of influence did they have on you as a musician?

Well, I was actually going to see them play PROPER SHOWS to like 40-50 people! That seemed so incredible at the time and insane to think of now. Mumford would always be first on for years with only me and a few people in the crowd…then I’d go talk/bore Marcus about folk guitar tunings haha. It was so inspiring that no one cared about them for such a long time and then they just took OFF! I remember dragging my parents to go see them when they were touring in this shit little pub to like 60 people.  Within like 9 months they were playing on Jimmy Kimmel or something. Something like that really lets you know it’s possible…to watch that process in real time.

You were turned onto the blues by non-traditional influences including Moby’s “Natural Blues”, the O Brother Where Art Thou? soundtrack, Everlast’s White Ford Sings The Blues and Prodigy’s Fat Of The Land. What do you think it was about these influences that appealed to you rather then more traditional ones?

I’d just never heard anyone sing like that before. I didn’t understand “Genre” then but later I learnt that’s blues singing. Once I heard it, though, it struck something primal in me.

You met Alex Da Kid a few years back and started writing hip hop music and lyrics for other artists on his KIDinaKORNER label, a subsidiary of Interscope Records. Had you done much in the hip hop genre before that? How did you and Alex meet and what was that experience like, as well as that of him later asking you to start making your own music?

No-I really loved some hip hop growing up. My friend Alex and his older brother were really into Jurassic 5, Wu Tang, Nas, Jay Z “blueprint”… that kinda thing and I basically lived at their place growing up, so as soon as there mum left that shit was cranked. Me and Alex Da Kid met after he was trying to work with Chris Martin and him and my publisher Caroline Elleray were up on a train to Newcastle to meet him. She played him one of my tunes, and he listened to my 3-4 demos the whole trip after that apparently! We met at a wheterspoons soon after that and just became really good mates.

You have mentioned preferring working with others over working alone when making music. What is it that appeals to you about the process of collaborating with other artists? You have worked with many other artists over the years. Who have some of your favorite collaborations been with and are there any musicians you’d love to work with going forward?

It’s just fun to see other people’s ways of doing things…like I’d normally do something somewhere then someone goes completely the other direction and that’s always exciting…and makes you learn. There’s a lot of dance acts I’d love to work with…how quickly they turn stuff round is very exciting to me. It’s like the old days…did you know Rolling Stones Satisfaction took 21 days from written to being released?? Insane to think about! Only dance acts and hip hop has got that freedom these days.

You like to put on a great visual movie with the song turned off when writing. How did you come to adopt this songwriting process? What is it about visual films that you find so inspiring when writing songs?

I picked it up writing movie/tv/advert stuff. It’s easy to pick up an emotion in a single look from a great actor. Pop songs for the most part talk about a split second emotion over 3 minutes, so if you see the right one it just sets you off.

It’s almost unrecognizable. The technology advances means anyone can do it. I remember when I wrote with KUNGS. He had been producing for like 2-3 years…first single was the biggest song in the world. That’s so exciting to me because that just wasn’t an option when I started. I’ve had to adapt 100% because of this. I feel us old dogs have slowly honed skills that means our skills will always be relevant because there’s short cuts now though.

I have read that “Breaking the States” remains one of the most daunting challenges for British artists and that the US has a far more competitive landscape than the UK. Were you intimidated at all about breaking into the US market when you first started out?

I mean, I think the only market I kinda cracked was Holland for a brief time a few years ago so catch up with me on this ha-ha. I’m just happy I get to get up every day and write songs…it’s such a blessing. I feel like I’ve won the lottery ha-ha!

You have written a great deal of songs for television and movies, including “Lead Me Home” for The Walking Dead and “Walls” for the Summer blockbuster Skyscraper starring Dwayne “The Rock” Johnson. What do you enjoy most about writing music for film/television and do you have any songs in the works for other movies/tv shows?

It’s so bloody brilliant because it’s a mystery novel. The movie company gives you like 2 sentences and you have to figure out what emotion they are looking for. If you’re REALLY lucky you get to watch the scene which makes it easier. The BEST part though is that it’s either yes or no after a few weeks, wheras with the solo stuff it can be years and years…the immediacy…death or glory is so great.

You recently attended The People Concern charity gala. How involved are you with charitable causes/events? Do you have any favorite charities that you like to support?

I always like to play anything charitable. As I said before, I feel so lucky to do this for a living and it feels so self-serving sometimes. It’s great when you can use your talents to help other people who just got a shit throw of the dice… “there but by the grace of god go I “ and all that…

You have had a lot of experiences in recent years, such as co-writing “Jungle” for X Ambassadors and touring with the band and having a Beats by Dr Dre ad that have made you more interested in pursuing the path of pop music. What is it about the pop genre that made you want to change course with your music?

I mean music genres have changed so much recently it’s just good to try other things. I’m a big believer of that wonderful Louis Armstrong quote “There is two kinds of music, the good, and the bad”.

Your new single “Paper Dreams” was recently released. What can you tell me about the inspiration for the song as well as the addition of electronic beats?

It’s a song about a complicated relationship experience I was going through. I came up with the metaphor of “paper dreams”… dreams that seem to fly away or rip easily. The new production is all part of this new “Fever Dreams” direction. It will get even more off the wall in the next few months promise!! Haha

You will be releasing your debut full-length album next year! What can people expect? I also read that you have a lot of songs written that you have to narrow down for the album. What is your process for choosing the songs you want to include? I imagine it’s a tough choice!

I have like 40 new songs written for this project at the moment. I really hope I can choose the right ones!!! I’m describing it as a deep closeted love for the 80s that for some reason was super uncool for ages, but now works in modern pop. This new stuff comes from all those blues soul folk voices that transitioned from the 70s into the 80s that I love so much, like Bruce Springsteen, Peter Gabriel, Steve Winwood, Robert Palmer, Hall and Oates, Paul Simon etc….

Besides the album, what’s next for you?

I have several dance cuts in the works and some VERY exciting film songs coming up. I heard I might be up for a couple awards this year also which would be insane!