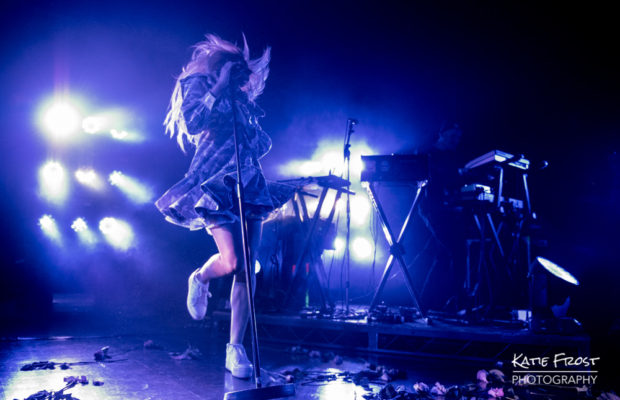 Following the terrorist attack at a concert in Manchester the previous night, I was concerned that many people would be apprehensive about coming to a show tonight, but I was pleased to see a queue of people waiting to get into the venue when I arrive shortly before doors opened. Security was understandably very tight, but the concert-goers were all very obliging.

First to take to the stage on this warm Tuesday night was Reading-based Etham who performed acoustic set, accompanied only by keys. His heart-felt tracks seemed to go down well with the crowd, who responded with enthusiastic applause.

At 9pm up-and-coming Norwegian electro-pop sensation Astrid S (Astrid Smeplass) took to the stage and was greeted by a sea of pink roses thrown at her feet by fans in the front row.

The twenty-year old first gained national recognition in 2013 on Norway’s Pop Idol. Despite finishing in fifth place, her career rapidly took off after the show and she gained an international following.

At this special show at London’s Scala, Astrid treated fans to a selection of tracks from her debut self-titled EP (released in May 2016) – including ‘Jump’ – plus her new single ‘Breathe’. The crowd sang along to every word as the pint-sized singer twirled around the stage with a smile almost constantly on her face – clearly enjoying performing to a packed room of fans who loved her music.

Astrid S is due to release her latest EP “The Party’s Over” on 30 June.