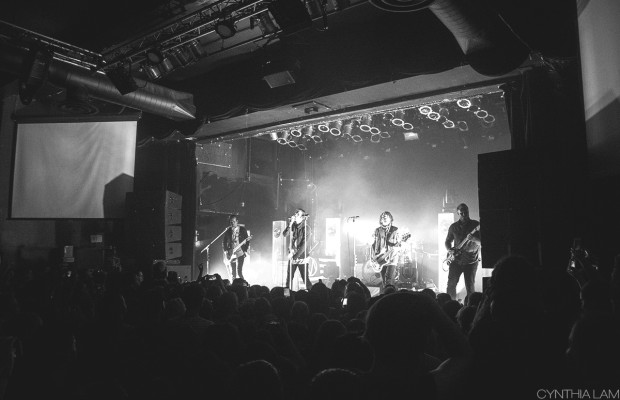 When Phoenix’s best alternative rock band The Maine announced that they would be doing a tour in support of their fifth studio album American Candy, I was dejected to see that it was not going to my hometown, Edmonton. However, when I saw that they would be playing in Toronto the week after I was to move there for school, I became ecstatic – it was the perfect way to celebrate the start of a new chapter in my life.

The show was held in the Mod Club, which is a small, intimate venue that fit the mood of the show perfectly. The great atmosphere inside and also outside of the venue made it perfect for the performances that were about to happen.

The new band of former A Rocket To The Moon singer and guitarist Nick Santino, called Beach Weather, took the stage first. Their soothing electronic rock sound started the evening perfectly. They have an extremely catchy sound that sounds great when listening to them electronically, and they sound even better live. Even though Beach Weather may not be the most energetic group live, they still bring a rock solid performance.

Next up was the headliner for the night, The Maine, who made the night extremely memorable. Since the tour is titled the American Candy tour, the audience had the opportunity to see the entirety of the amazing album live. The band’s performance of their songs “(Un)Lost” and “American Candy” were especially awesome, with the crowd going wild and singing just as loud as the band was playing. After most of the album was played, the band moved on to play some older favourites including “Everything I Ask For” and “Inside of You.” They ended their set with the last song off of American Candy titled “Another Night on Mars.” The song itself is a great anthem that describes the perfect night out with friends, and ended the night on a wonderful note.

It is always such a treat to see The Maine live. They’re the band that sounds both amazing when you’re listening to them on your iPod, and are also phenomenal live. Time after time, they bring a massive amount of energy to the crowd and get the same response. They always interact with the crowd, speaking between songs, instead of being that band that just plays their songs and ignores the crowd during breaks.

Personally, this is the fourth time I’ve seen The Maine and they have never disappointed – instead every single time they’ve exceeded my expectations. I’ve just recently moved to a new city by myself and started university. It’s been a mixture of stress, excitement, and it’s been overwhelming in general. However, all my worries and all my anxieties flew out the window when I saw The Maine live. No matter how displaced or scared you may feel, there is still one place that feels familiar, feels comforting, and feels like home, and that’s at one of The Maine’s shows.