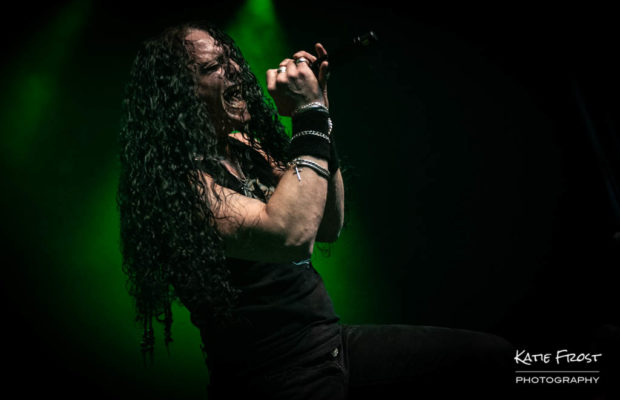 Following a triumphant run of sold-out shows across the UK at the beginning of 2018, multi-platinum selling hard rock legends Skid Row returned to London last Saturday, armed with an arsenal of their classic riff-heavy, high-octane songs.

With a total of five bands on the bill, doors were at the early time of 5:00 pm, which unfortunately meant that the venue was only partially full when opening band KilliT took to the stage at around 5:30 pm, but that didn’t stop the London-based rock band giving 110% to their performance. Vocalist Gaz barely kept still throughout the band’s entire set and all five band members posed wonderfully for the photographers, each looking like they were having an awesome time – especially drummer Pete. One bonus about the large number of bands on the line-up tonight was that the support-bands’ drum kits were fairly close to the front of the stage, meaning that it was possible to get some shots of the drummers, which is usually quite tricky. KilliT guitarist Claire was the only female band member in the evening’s line-up and she represented brilliantly; flinging her long brown hair back and forth as she let rip on her guitar. KilliT played a belting set featuring “Love Is The Chemical” and closing with “Shut It Down”.

Next to hit the stage were English melodic rock band VEGA, who exploded onto the stage and launched straight into “Let’s Have Fun Tonight”. Like KilliT before them, VEGA were full of energy and enthusiasm, particularly vocalist Nick who got the ever-growing crowd warmed up for an evening of great music and good times! I hadn’t seen the band live before and wasn’t familiar with their music, but really enjoyed their set, particularly “Worth Dying For” from the band’s most recent album Only Human (2018), and “Every Little Monster” from their 2016 album Who We Are (a very catchy and toe-tapping track – I would highly recommend).

The third band to take to the stage were H.E.A.T, who brought their hard rock tunes all the way from Sweden. Vocalist Erik leapt all around the stage and ventured into the crowd to interact with fans at various points during the band’s set…at one point taking sip of a drink belonging to a lady in the front row! H.E.A.T opened their powerful set with “Bastard of Society” from their most recent album Into The Great Unknown (2017). I really enjoyed watching drummer Crash (possibly not his real name) who played with great energy and conviction, and every member of the band looked like they were really enjoying themselves. For me H.E.A.T have a heavy 80s rock vibe, which I really enjoyed. Tracks such as “Living On The Run” could have easily have been released in the mid-80s as opposed to 2012! If 80s classic / slease / hair rock is your thing then I think you would enjoy H.E.A.T very much!

Next up were Swedish rock’n’roll band Backyard Babies, who I first saw at Tons of Rock festival in Norway back in 2015. Vocalist Nicke explained to the crowd that he was sick (and had a scarf tightly wrapped around his neck) but still sounded great vocally. Lead guitarist Dregen is always great fun to watch live and tonight was no exception – and the whole band put on a great show. My favourite track of theirs has got to be “Th1rt3en Or Nothing”, and I don’t think I was the only one as the now-packed room were also singing along. The band played a great set to a now full and very excited crowd, ending with “Brand New Hate” from their 2001 album Making Enemies Is Good.

By the time headliners Skid Row took to the stage the 2,300 capacity venue was absolutely rammed with music fans having a brilliant time. The band opened their mammoth 18-track set with “Slave To The Grind” from their 1991 album of the same name. Despite the band having been around since 1986, all five band members were very sprightly and really engaged with the crowd. Vocalist ZP Theart bounced around the stage with the energy of a man half-his age, and his band-mates were equally as energetic. On 18th January this year Skid Row released a 30th Anniversary deluxe edition of their 1989 self-titled album, and the band’s set featured a great selection of tracks from the band’s back catalogue, including my personal favourite “18 & Life”. When you are a rock institution like Skid Row one encore isn’t enough, so the band returned to the stage not once but twice – much to the delight of the crowd. It had been a fantastic evening of rock and I thoroughly enjoyed myself!