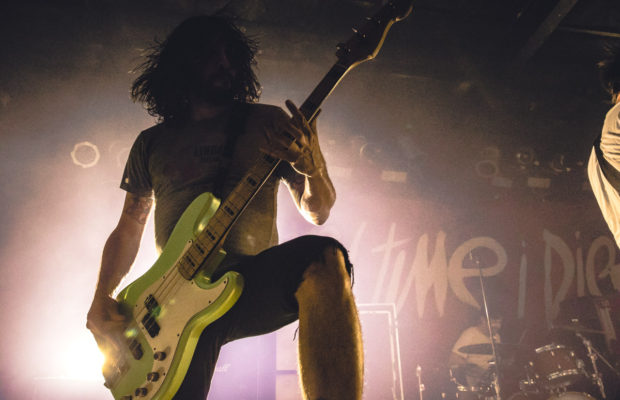 Every Time I Die is a band that has been rocking for two decades, but somehow every member still acts like they’re not a day over twenty onstage. Gritty metalcore with a southern rock tint to their sound, Every Time I Die brought a show to Chicago on Sunday, and left their audience fired up and exhausted by the end of the night.

Bottom Lounge was sold out for Sunday night’s performance, with fans arriving early to catch openers God Alone, ‘68, and Wage War, each of which held their own onstage. God Alone played a short and sweet set, and even though they were not very well known by the audience, their sound was well-received. The band itself had a very bluesy sound, with a little distortion and grit that made them punky but still pretty laid-back. Rock duet ‘68 followed, bringing their own intriguing presence to the stage. A two man show can be very interesting, and this was shown by frontman Josh Scogin and drummer Michael McClellan. ‘68 is a band that doesn’t get old, because they don’t sound like any other band out there. Scogin and McClellan set out to make as much noise as they can and have the most wild time on-stage, and that’s what they did Sunday night. Entertaining and energetic, they kept the crowd’s attention and got them excited for Wage War and Every Time I Die. Wage War then followed suit, putting on an energetic set and teasing the crowd with a few new songs off their upcoming release, Deadweight, which is set to release in early August.

After Wage War’s set, the crowd was buzzing with anticipation, waiting for Every Time I Die to start. Once the lights went out, the crowd went insane. Every Time I Die hit the stage, and the atmosphere in the room was indescribable. They opened with a classic fan favorite – “Decayin’ With The Boys,” and played a pretty hefty set. With blinding lights and a more energetic stage presence than most people could even dream of, that band can bring the fire. They played a little of every album, with a lot of their most recent release, Low Teens, to many fans’ enjoyment. Guitarist Jordan Buckley had no problem doing wild jumps on stage while his brother, vocalist Keith Buckley, was running around like a madman, flipping his hair and rocking out the entire set. Guitarist John McCarthy and guitarist Andy Williams also complimented each other’s behaviors onstage, just as energetic and still performing incredibly well. Drummer Daniel Davison also didn’t miss a beat for the entire twenty-two song set. All in all, Every Time I Die packed a punch with their gritty, bluesy, soulful metalcore, and their fiery, energetic attitudes, and brought a show that Chicago won’t forget anytime soon.

Photos and Words by Tony Truty