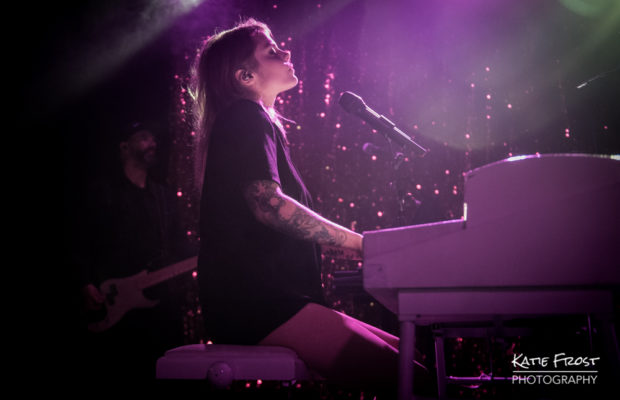 Cœur de Pirate is the solo project of award-winning singer-songwriter and pianist Béatrice Martin from Montréal, Canada. She first came to my attention when she featured on the track “Peace Sign” by Canadian singer/songwriter Lights from her 2013 album Siberia Acoustic – I was mesmerised by her beautiful voice and have been looking forward to seeing her perform live ever since! This show is the only UK date in Martin’s European tour in support of her latest album En cas de tempête, ce jardin sera fermé which was released in June of this year and marks the tenth anniversary of her musical career. The album’s title loosely translates to “In case of a storm, this garden will be closed”, which were reportedly the words on a sign that she focused on during a panic attack she had on the streets of Paris in 2011 in order to help ease her anxiety.

When I arrived at the venue just before doors there was a huge line of fans queuing up; eager to get inside from the cold and also to enjoy a rare UK performance by Béatrice. The Garage was packed and, although the show was not advertised as being sold out, it must have been nearly at capacity. At around 8pm the lights went down and Yorkshire alt-pop singer-songwriter Ruby Duff took to the stage, lit initially only by a single spotlight. The chatter in the room instantly stopped as everyone focused on the young girl on the stage with a very powerful voice. Ruby told the crowd that her music is usually electronic but this was a special stripped-down performance. She was very sweet and engaging and her vocals were complimented by a piano (keyboard). I would definitely check out Ruby’s music again.

At 9pm Cœur de Pirate took to the stage; Béatrice Martin was joined by a guitarist, bassist, drummer and keyboard player and she opened her set with “Combustible” from En cas de tempête and went on to pay a humongous 23-song set! As well as tracks from her latest album, she also treated the crowd to songs from her debut self-titled album including “Pour un infidèle” and “Ensemble”, as well as other tracks from her back-catalogue – mixing it up between playing songs at the piano and moving and grooving around the stage with just a microphone.

Martin sings entirely in French on her latest record but (although my French is limited to being able to ask for directions and order a beer) I find that I can enjoy her music regardless of being able to understand what is being said as the juxtaposition between light and dark in her music transcends the language barrier and you can hear the emotion in her voice as she sings. Despite tracks from En cas de tempête sounding largely airy and upbeat, lyrically Martin opens up about unhealthy relationships and self-destructive habits. A lot has gone on in her personal life since the release of her 2015 record Roses, and the creation of this album has proved to be a cathartic process. There is a turbulent narrative throughout the record that is expertly woven within her trademark delicate and beautiful melodies.

This was my first time seeing Cœur de Pirate and her live performance was everything I had hoped it would be and more. She closed her set with“Prémonition” which was the first single to be released from En cas de tempête, ce jardin sera fermé.