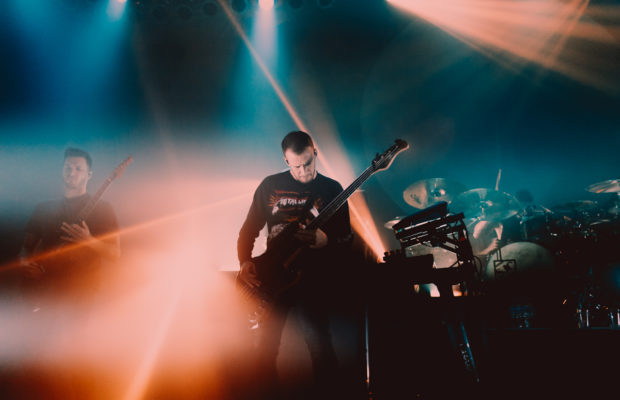 Architects with Stick to Your Guns, Counterparts
House of Blues
Chicago, IL
February 22, 2018

Words and Photos by Nina Tadic

On a typical Thursday night, it’s not a poor assumption to make that most people are exhausted from work or school, busy with their everyday lives, and ready for the weekend. On Thursday, February 22, however, that did not stop an excess of fans from turning out for Architects’ headlining performance at House of Blues in Chicago.

The show kicked off with Counterparts, who performed a solid set that welcomed a lot of tracks off of their most recent release, You’re Not You Anymore, along with a few older fan favorites like “Choke” and “The Disconnect.” They also had no problem keeping a fun dialogue with the crowd, asking them whether they enjoyed the new album and if they were having a good time. All in all, the set was short and sweet and got everyone pumped up for the night’s events.

Following Counterparts was Orange County hardcore boys Stick To Your Guns, who also put on a splendid performance. Stick to Your Guns is a band that, regardless of what songs they perform, or how large the crowd is, will put on a show like no other. The amount of energy that radiates from every band member their entire set is always something ethereal, and this performance confirmed that. Kicking off their set with “Married to the Noise,” off their most recent release, True View, they immediately got the crowd fired-up. Then, they managed to keep that fire lit with a dozen more songs, including tracks off of The Hope Division, Diamond, Disobedient, and Better Ash Than Dust. Their well-rounded setlist managed to intrigue new listeners and pull in old fans, and vocalist Jesse Barnett’s words between songs packed a punch as well. During their song, “The Suspend,” Barnett spoke to fans about how he wrote the song to honor his mother, who always did her best as he was growing up to teach him to do and stand up for what is right. Barnett explained that we will all face death at some point, and once we reach that point, what will matter will be the way we went about our lives and what we stood up for and the way we treated one another. After discussing this, the band continued the song, and finished off their performance with two more tracks, which were more than enough to leave their audience fulfilled emotionally and physically from a powerful performance overall.

After Stick To Your Guns’ set came the reason for the performance, metalcore outfit Architects. In the same way Stick To Your Guns has a very vibrant energy at all their performances regardless of their audience, Architects does as well. Architects has always been a band that knows how to captivate fans into an almost trance-like state, mainly because of how well their visual performance goes with their performance sonically. The band always pairs up beautifully coordinated smoke effects, flashing red and white lights, and rays of gold and blue beaming like webs across the stage, and they did so again for this performance. With a set that was a whopping fifteen tracks, the band managed to play a beautiful mix of songs dating as far back as their Daybreaker era (“These Colours Don’t Run”), all the way forward to their newest single, “Doomsday.” The crowd had no problem tearing up the floor with giant mosh pits for almost every song, but also had no problem pausing moshing to sing along where they felt it necessary. The most heartfelt moment of the night, however, seemed to be when the band, after performing “Doomsday” left the stage, and the crowd began chanting for an encore. As soon as they reappeared onstage, vocalist Sam Carter thanked everyone in the room for coming to the performance, and reminded them how unreal it was to sell out venues like House of Blues all across America while not even being from this continent. Following that, Carter also mentioned how the band’s late guitarist Tom Searle would not have even dreamed of the band reaching this point of success. Carter told the audience that everything the band does, they do for Tom, and the crowd could not help but clap and cheer for Searle. Carter thanked them, before continuing with the encore, which was dedicated to Tom, and was their track “Gone with the Wind.” The track was performed beautifully under glimmering white lights projecting patterns onto the stage, and the crowd was completely in awe the entire time. The entire night was stunning, and the way Architects performed was an incredible tribute to their fanbase, the audience of the performance, and to Tom Searle. If given the chance to see a performance by Architects, seize the opportunity, because very few metalcore bands can put on such a beautiful live performance in every aspect.