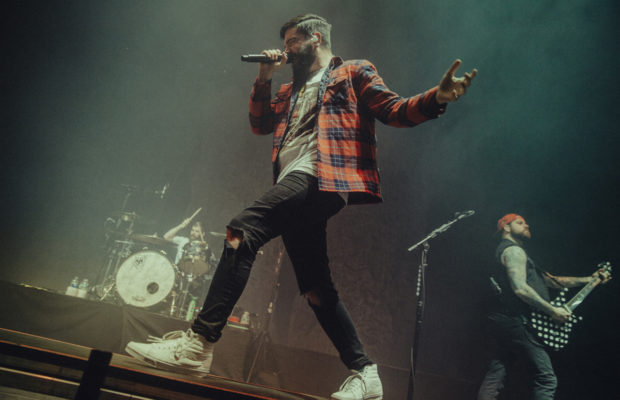 A Day To Remember with Papa Roach, Falling In Reverse and The Devil Wears Prada

Words and Photo by Jess Williams

It had been a while since the last time us New Yorkers got to see metalcore veterans A Day To Remember perform live, so you can imagine how excited we were to hear that the band was bringing their “15 Years In The Making Tour” to the Hammerstein Ballroom at The Manhattan Center. On Monday night, all 2,200 of us who were packed inside the venue were getting our weeks off to a great start with some live music from The Devil Wears Prada, Falling In Reverse, Papa Roach and of course, A Day To Remember.

I remember first discovering The Devil Wears Prada when I was in high school. I used to wear this turquoise paint drop style shirt to school and it would get a lot of looks. However, I was never able to see the band perform live until now. Their live set was filled with energy and it was extremely captivating to be a part of both as an audience member and a photographer. Though The Devil Wears Prada’s set was early and short, they made the best of their time and didn’t stop for anything. As the openings band job description typically includes “getting the audience hype for the headliner”, they definitely fulfilled that requirement.

With a stacked lineup such as this one, it is safe to say that there was a diverse range of fans in the crowd. Many there for A Day To Remember, others for Papa Roach and a strong showing of fans for Falling In Reverse. Though the band has gone through some tumultuous drama over the years, they are still a ton of fun to see live. From the photo pit, it was hard to hear lead vocalist Ronnie Radke, over the shouts and screams of the die hard fans in the front row. The band was giving it their everything as they kicked off their set with “I’m Not A Vampire”. After the conclusion of “Alone”, Radke explained that their guitarist Christian Thompson had torn his shoulder several hours earlier and their replacement guitarist managed to learn their whole set in a matter of hours. It was commendable.

The third band of the night was Papa Roach and I mean, who hasn’t heard of these guys before? They’ve been around for a while, but one thing that hasn’t dissipated over the years is their live performance energy. I was truly blown away. Papa Roach’s 13 song setlist was a trip from start to finish. Opening with “Crooked Teeth”, it wasn’t long before lead vocalist Jacoby Shaddix climbed into the crowd while singing “American Dreams”. To be quite honest, I hadn’t really given Papa Roach the time of day before the show and their insanely lively and diverse setlist (which included a cover of Blur’s “Song 2”), really changed my mind.

As “Shots” by LMFAO began to play throughout the venue, the crowd was getting pumped. Any A Day To Remember fan knows that that’s the song that is played right before they grace the stage and open with “I’m Made Of Wax Larry, What Are You Made Of?”. The bands live energy is unparalleled in the industry and as a photographer, I specifically appreciate lead vocalist Jeremy McKinnon’s interactions with photographers in the pit. The music, the lighting, the band and the performance as a whole all came together to make it a night to remember…. that plus their cover of Kelly Clarkson’s “Since U Been Gone”. A Day To Remember played a lengthy setlist featuring 16 songs, plus a four song encore (that’s a bold move). Some songs they played include “2nd Sucks”, “You Be Tails, I’ll Be Sonic”, “Paranoia” and “All I Want”. It’s honestly so much fun getting to see A Day To Remember play live. Their music is great and their energy is amazing… there’s a reason they’ve been around for as long as they have been!