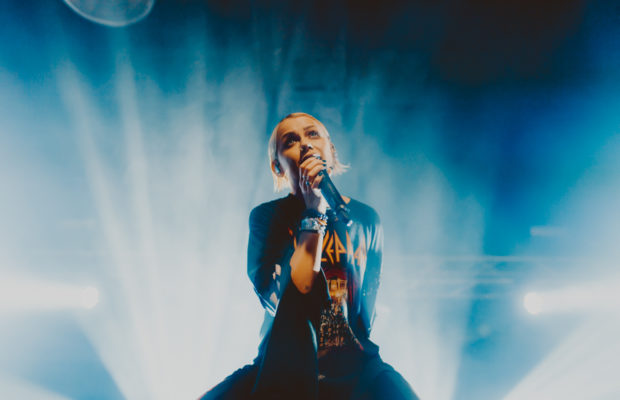 In Chicago, a city that is always moving, there is always something going on. On Saturday, February 24, there were quite a few concerts happening, and we were lucky enough to catch Tonight Alive and Silverstein, with support from Broadside and Picturesque at Concord Hall. Concord holds a maximum of 1500 people, and on Saturday night, it held somewhat close to that many. The venue still felt small, cool, and cozy under the dim yellow lights – until the show began.
Once post-hardcore band Picturesque took the stage and those cool blue lights lit up, the crowd got ready to rock. Cheering and shouting from fans began to fill the room, and then the band started their set. Vocalist Kyle Hollis had no problem belting out every note to their opening track, “Waiting,” off their album Back to Beautiful. Hollis’s voice is just as clear and rings smoothly just as it does on recording, and when accompanied by the band’s fast-paced guitar melodies and their solid drum beats, is phenomenal. The band has a wildly fun stage presence, and a sound in the same vein as Pierce the Veil, Dance Gavin Dance, and Circa Survive. Even though the band’s set was a short one, it was punchy and vibrant and got the crowd warmed up phenomenally for Broadside, Tonight Alive, and Silverstein.
Following Picturesque, Broadside also knew how to get the crowd pumped up. The band immediately jumped into a fan favorite song, “The Simple Type,” before following with a handful of tracks from their most recent release. However, the track that definitely pushed the crowd above and beyond their prior level of energy was “Coffee Talk,” which was what the band ended their set with. There was not a person in the room who was not singing and dancing along to the pop punk banger.
After further winding up the crowd, Broadside cleared the stage and made way for Aussie pop punk band Tonight Alive, who are currently touring in celebration of their most recent release, Underworld. For a band that doesn’t hail from the States, Tonight Alive could’ve easily passed for local with the crowd reaction they received. Unfortunately, due to vocalist Jenna McDougall suffering from a fairly severe throat infection, the band did have to play a shortened set. However, even with their set being fairly short, that did not stop it from being anything but powerful. Performing four songs off of Underworld, and three older ones off of The Other Side, the band still put on a show to remember. If McDougall had not mentioned her throat infection, not a soul in the room would have noticed it, because with her powerhouse vocals she managed to reach every note for the entirety of the set, and every person in the room helped her out by singing along, as well. With the amount of energy that she, along with the rest of the band, had their entire set, it felt like it just as well could have been a twenty song long set. Though it was not that long, McDougall did promise the audience that the band would be back in Chicago for a full set later in the year.
Finally, closing off the night was Silverstein, who performed the longest and loudest set of the night. Opening the night with “Ghost,” the band had the room bursting at the seams with red and orange flaring lights and the crowd moving so much the floor was shaking. The entirety of the set was just so vivid and passionate, and was worth seeing. The band performed songs spanning the last decade, and their fan base, which ranged in ages from most-likely high school to upwards of thirty, seemed satisfied with every track, belting out the lyrics and dancing all night. All in all, the Get Free Tour at Concord Music Hall was a phenomenal place to spend a Saturday night.