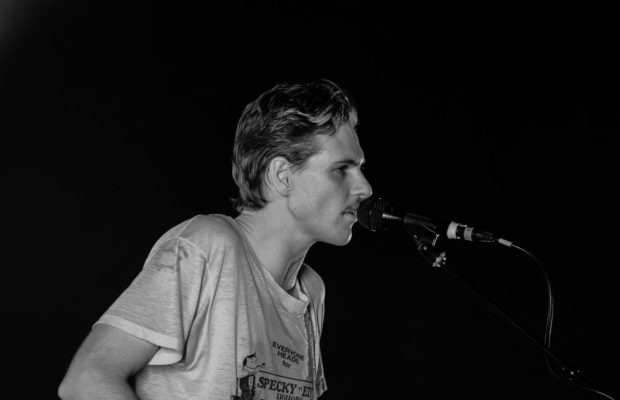 Photos by Emily May

Many bands perform special shows during the holidays and this past Christmas saw New Albany, IN rock band Houndmouth host Krampus- A Houndmouth Holiday Show.  With the stage adorned with a decorated tree and Christmas lights, the theatre had a warm and festive atmosphere!  Louisville counts the band as a hometown favorite, with New Albany being just across the river.  The theatre was packed this evening with fans, as well as the band’s friends and family, all eager to sing and dance and have a great time.  Starting the evening out was Louisville psychedelic rock band Boa USA.  Consisting of Logan Hopkins (guitar/vocals), Gaven Hopkins (drums/vocals) and Shane Spader (bass/vocals), the band is the epitome of fun on stage.  They thanked the crowd throughout their set for being there and said how excited they were to be sharing the stage with Houndmouth this evening.  With plenty of interaction amongst themselves and with the crowd, they definitely made sure the everyone was having fun!  Their set ended with Spader catching some air off of the drum kit, which earned plenty of cheers from the crowd!   Next up was Houndmouth, who walked onto the stage to plenty of cheers and applause!  Starting out with “Comin’ Round Again”, the band played a long and varied setlist, including classic hits such as “Penitentiary”, “Sedona” and “Hey Rose”, as well as newer songs such as “Modern Love” and “Golden Age”.  Chatting with the crowd throughout their set, the band was all smiles on stage and had the crowd on their feet for much of the show, filling the venue with a fun and infectious energy.  Ending the set with a cover of John Lennon’s “Happy Xmas (War Is Over)”, the crowd sang along to the classic and beloved Christmas song, giving the evening a festive end!  Houndmouth and Boa USA performed fun and energetic sets and gave their fans a wonderful evening of music and holiday cheer!