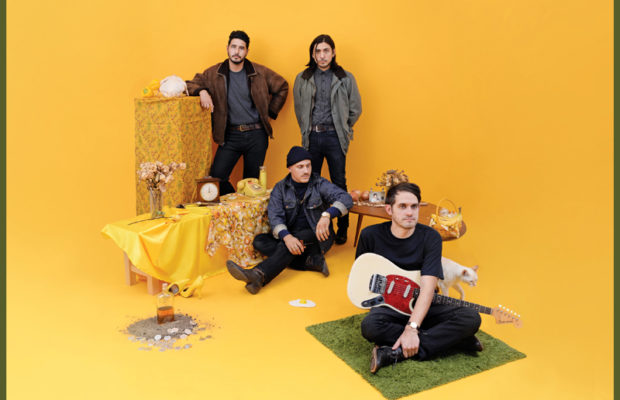 California has been known for pumping out their own breed of bands over the years and have come to create a genre of music that is inherently “Californian”. For those of you who don’t know what I’m talking about, take a listen to Wavves, FIDLAR, SWMRS, The Frights, King Shelter and Together Pangea. Just close your eyes while listening to their music and you can feel the cool summer air on your face as you ride down Hollywood Boulevard. Nestled in Santa Clarita, California, which is just north of Los Angeles, Together Pangea was born. The band came onto the scene in 2010 with their DIY garage rock punk sound and while they have matured and their sound has evolved over seven years, those sounds are at Together Pangea’s core. With Together Pangea’s newest release, Bulls and Roosters, listeners see the band blend the sounds of their influences and former tour buddies while putting their own spin on the album and have delivered us with something quite special.

The 13 track record opens with the exuberant and youthful “Sippy Cup” and a sound that listeners are familiar with. The previously released single “Better Find Out” offers listeners with a more spastic sound, allowing for the listener to dance freely around their room while listening. The inspiration for the band is no more evident than in “Gold Moon”, which sounds as if it was plucked right from the 70’s. The song rustles through a groove as the drums power through aggressively. The guitars complement the complex harmonies, making a strong combination that make the fun lyrics even more exciting to sing along to.

As listeners get into the latter half of the record, “Stare at the Sun” is a record that bursts through the metaphorical door, it comes out swinging. The track blends some of the juiciest harmonies of the record with deep bass and fast drums and in keeping with their old school inspiration, the sprinkles of vintage sounding synthesizer throughout the record only help to lift it up. By now you’re probably wondering how Together Pangea wraps up such a strong album, and I won’t lie to you — when I was at this point, I was wondering the same thing, too. The closing track, “Alison” is a very fitting one. While slower than some of it’s partners on the record, “Alison” is a strong song all in itself. The guitar, bass, drum combination that Together Pangea mastered so effortlessly is present throughout the song but what takes this track above and beyond is the masterful combination of horns and harmonies throughout the chorus. It’s a real gem.

While the genre of DIY music, garage punk music, the list goes on, is becoming more and more mainstream, bands can find it harder and harder to create music that doesn’t just blend in and all sound the same as the veterans in the genre. For Together Pangea, that challenge was not even present — they blew this record out of the water.