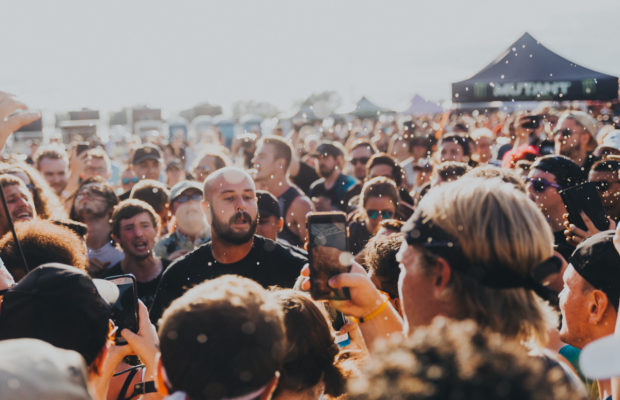 Words and Photos by Nina Tadic

Every year, the Vans Warped Tour is staple for concertgoers in the alternative music scene. Many start attending the festival as preteens, and continue on for years to come. The Vans Warped Tour is known for its eclectic variety of artists, and the opportunities it brings for artists and fans alike. Many big-name artists, such as Blink-182, The Black Eyed Peas, Katy Perry, Pennywise, and more, have done their time on the tour, and every year, others follow in their footsteps. The Vans Warped Tour is responsible for tons of artists’ growth in popularity, and the tour also allows a chance for many fans to meet their favorite artists, and see a variety of them at an affordable cost. This year, the Vans Warped Tour traced back to its punk and alternative roots, striving to book a lot of heavier artists than it has in the past few years.

This year, at the Hollywood Casino Amphitheater in Tinley Park, IL, the tour put on a date to remember. In prior years, Tinley Park has seen some pretty sweltering days, but the last one as hot as 2017 was 2012, when temperatures broke over 100 degrees by noon. However, just like the 2012 date, the heat could not stop the party. Some fans arrived as early as 9 AM, and when doors opened a few hours later, fans swarmed to purchase schedules and map out their day, before racing off to different stages with their friends.

Some of the most impressive sets of the day were put on by some of the “smallest” bands on the tour. In the morning, Silent Planet, a metalcore band signed to Solid State Records, had an incredible reaction from the crowd as they performed on the Mutant South stage. Vocalist Garrett Russell put so much emotion into his lyrics, and the crowd pushed that same level of emotion right back at him. Climbing onto the barricade and into the crowd, Russell intrigued first-time viewers, and connected incredibly with more familiar fans.

Another band that made waves this year was hardcore outfit Knocked Loose. After spending about a year on Pure Noise Records and releasing their first full-length album, Laugh Tracks, Knocked Loose drew an incredible crowd full of familiar faces for their Chicago date of the Vans Warped Tour. The Full Sail Stage is a smaller stage, usually having a mild amount of fans viewing each set, but for Knocked Loose, the crowd stretched completely past the sound booth. For the band’s first year on Warped, they definitely made quite a splash among the tour lineup.

Sworn In was also a band to take note of at the Chicago date, the reason for this being that during their first time playing the Vans Warped Tour, they were chosen for a larger stage – and they definitely earned it. They performed a mix of some older songs – including fan favorites “Hypocrisy” and “Snake Eyes” off of their debut full length, Death Card, and some newer tracks off of their release All Smiles. It was a sight to see in Chicago, as the band is from Grayslake, IL, and this was their hometown show.

A few other bands who have been around the block more than once with the Vans Warped Tour put on fantastic sets as well. Stick To Your Guns has been on the tour a good few times since 2008, and are still pulling an insane crowd for their entire set. Being As An Ocean and Counterparts both also both showed their stuff and drew large crowds, as well. Being As An Ocean performed right around 6 PM, the point in the day where most of the fans and bands are exhausted, and still drew an incredible crowd, and then Counterparts also pulled a fantastic crowd right past sunset.

From the start of the day to the end, despite broiling heat, each band had a strong set, and an even stronger crowd. If every date of the tour looked like Tinley, then it was definitely one for the books.