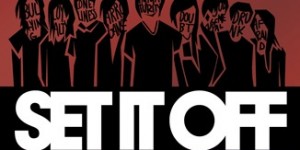 If you’re someone who’s into bands such as All Time Low, The Maine, Life On Repeat, and A Day To Remember you’ve probably heard of Set It Off as well. Cody Carson [vocals] is known for recording and uploading his own cover videos onto Youtube, promoting his band while at it. His cover of ADTR’s “If It Means A Lot To You” reached 45,000 views. Set It Off released a remasted version of their EP Horrible Kids on Equal Vision Records on August 30th, 2011.

The album starts off with a mysterious vibe in the intro of “Breathe in, Breathe out” that just sends the listener into a wave of anticipation for what to expect in the album. Throughout the album, Set It Off keeps a rather dark vibe while still managing to stay in the pop rock genre. The fourth track on the album “@reply” has one of the most interesting and unique intros ever. With the dark sound and what sounds like the nice use of chimes, it leads the listener in to a high energy pop punk track.

All in all, Set it Off did a wonderful job with Horrible Kids. It’s one of those albums that won’t get boring after you listen to it time after time. Filled with nine catchy tracks (and two music videos if bought on iTunes), Horrible Kids is an album that you will instantly fall in love with.