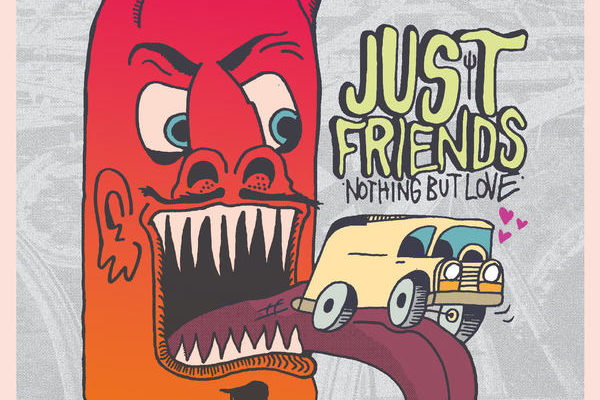 Once in a blue moon, there comes a band whose sound you cannot categorize or even begin to describe. They blur genres, weave and twist their music into a sonic blend that surrenders you lost for words, and leaves you shook with their capabilities in making unmistakably and unarguably great music. Is it punk? Is it pop? Is it smooth 90’s R&B inspired? Can it be categorized as rap? Is that the sweet sound of jazz you hear? So many questions, but honestly, who knows and who cares! Just Friends, an 8+ piece band from California, have tossed out the formulaic notions of making a punk record out the window only to rewrite all the rules for making an underrated hit of an album with their recent release Nothing But Love, out now on Bandcamp and available for pre-order on Counter Intuitive Records.

The album marks their second record release since 2015 – first record release with Counter Intuitive Records (Mom Jeans., Prince Daddy and the Hyena) – and highlights the band’s instinctive ability to collectively come together to generate a stellar 13-track record that showcases all of the member’s talents as well as their strong songwriting skillset.

The album kicks off with a funny puerile telephone conversation skit between band members on “1-800-Chop-City” and easily transitions into the fun, energetic “Never Gonna Bring You Down” which features a couple of rap bars, hella horns and a sick breakdown that is only amplified by Brianda and Sam’s powerful vocals. Songs like “Flex,” “I Wanna Love You,” and “Worry” showcases Brianda’s incredible vocal range that is truly like gospel in one’s ears and lyrically those songs are gush-worthy ballads that make your heart flutter.

It would be hard to narrow down what songs are the strongest on the album since Nothing But Love is an instant hit from beginning to end. There is so much that can be said, analyzed and dissected about how radical this Just Friends’ record is, but that is all beside the point when you can just give it a listen for yourself and make sure to share it with others. It truly would be a shame if this album didn’t get the recognition it deserves because it is an off-the-wall masterpiece.

Give Just Friends’ Nothing But Love record a spin on Bandcamp and catch them on tour with Graduating Life this summer on the west coast.

You can check out the album on Bandcamp, here.