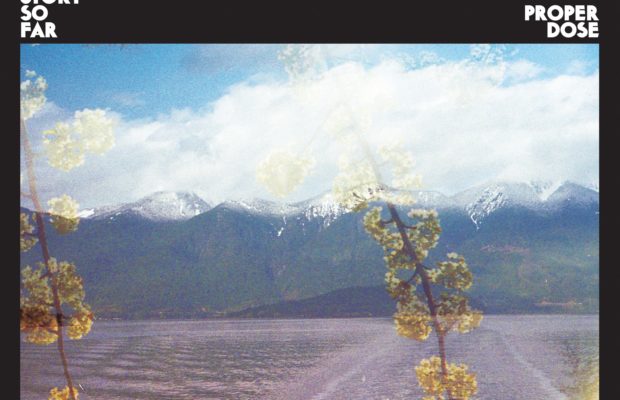 Following a three year silence, The Story So Far is back and hitting the ground running. The band truly is one of the staple pop-punk bands in the scene and it’s so amazing to have them back in such a big way. Their newest release Proper Dose is a change of pace for the California based band while still keeping their roots. By taking the time off of touring, The Story So Far were able to look at themselves with fresh eyes and ears, returning with their most cohesive and confident record to date.

The first song and title track of the album clearly shows growth from the band’s self-titled album up until now. They’ve kept the same jumpy choruses and included lyrics that so many fans will relate to, however there’s something more polished about it this time around. “We were so burnt out on from touring, and playing the same songs over and over again,” says Parker Cannon, the band’s vocalist and lyricist, “We knew we had to take a step back and collect ourselves.” The band had all the time to have a vision, write songs and instrumentals, re-work those ideas, re-work them again and then record. This record and the time it took show just how hard to band worked and gives an insight to new influences and ideas that have pushed them outside the box.

It’s crystal clear all the way through Proper Dose that the band is pushing the envelope and creating a new sound for themselves that older and newer fans alike will love. It’s interesting to hear the development in the vocal range and the overall sound of the album. Following their self-titled album, Proper Dose seems more mellowed out as the band is drawing from much broader influences such as The Beatles. Every single song on this album sounds like it could’ve been written for Under Soil and Dirt or What You Don’t See initially, then re-written with a new flare to create the overall vibe of Proper Dose.

The content of the album in general seems to be some of the same from previous albums – loneliness, wanting to be accepted by those you love, heartbreak and trying to look for a more positive outlook on life. The overall sound of the album seems more upbeat; from the softer-spoken lyrics to the not-so-aggressive instrumentals, you can hear how much their sound has matured. Taking a step back to collect themselves and knowing they had all the time in the world to write this album the way they wanted to really bode well for the band.

This time around, it’s easy to see how The Story So Far as grown in every sense of the word. Lyrically, the songs still pack a punch, just delivered in a much cleaner and less gritty package. Expanding the vision gave the rhythm section a ton of room to explore more than ever before with new sounds and new ideas. Vocally, you can hear Canon’s range has greatly expanded, which adds such a prominent new layer to the sound palette you get from the album.

Following the release, The Story So Far are heading out on the road to tour the UK and US. The Story So Far have created a nearly perfect album utilizing their newfound confidence along with new influences and sounds.Proper Dose will make the band stand out in their genre and push them into new spaces. I’m hoping they continue on this path of trying new things and allowing their fans to continue on this journey into new territory with them.