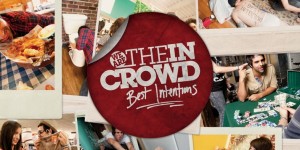 New York based, pop/rock band, We Are The In Crowd, seek to make their mark out in the music industry with only their Best Intentions. The five-piece band formed in early 2009 through MySpace, and with a little bad luck here and there, the band was then signed to Hopeless Records. More than a year since the release of their first EP, Guaranteed To Disagree, the band was ready to drop their first full-length album, and having done just that, on October 4th, 2011, Best Intentions was released.

Over the summer, fans were able to get a taste of the band’s anticipated album with the release of the opening track, “Rumor Mill.” This offered WATIC’s true original sound and was not drastically any different than the sound from Guaranteed To Disagree. What was more noticeable was that the band’s never-ending energy remained and was even more powerful than ever, keeping fans on edge for more.

Throughout the album, there is a sense of maturity in the lyrics. It was apparent in “See You Around”; “Say goodbye / to the night of getting into trouble / and dancing with the devil”, the vocals both from Eckes and Jardine have become stronger and alluring. The beats and riffs created by the band, in comparison to the EP, have perfected greatly whether the tempo slowed down or picked back up rapidly, as most of the tracks seemed to have done on this record. Come to find that in just only the third track, “The Worst Thing About Me”, the vibe went down a notch, but it still offered that same WATIC spark and that’s what holds the listener to get through, Best Intentions.

Slow songs are something different and not the typical sound one would hear from WATIC. “You’ve Got It Made” is a post-break up song and although most break-up songs are cliché, the incredible song-writing and melodies, fused with the acoustic guitar and drumming keep this song on its toes basically still proving itself worthy of an original WATIC tune.

Although from time to time, Jardine’s vocals are compared to another leading lady, Hayley Williams of Paramore, Jardine partners with guitarist, Jordan Eckes on all their tracks. The constant lyrical conversation between Eckes and Jardine along with the band’s aura, give We Are The In Crowd their own unique sound that separates themselves from bands such as Paramore or Hey Monday.

The reoccurring and obvious theme of Best Intentions is the situation in which one gives their all for the best intentions only to get to the point where that best intention wasn’t as near as it was on hitting its mark or none at all for that one individual. By the end of the album, the strong intense sound in “Better Luck Next Time” ends Best Intentions for We Are The In Crowd on an unforgettable note.

While this record may or may have not pleased everyone, We Are The In Crowd only set out to take on the world with the best intentions.