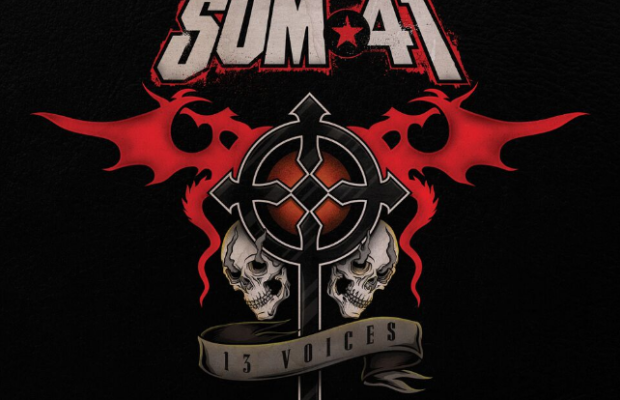 After Sum 41’s Deryck Whibley came face to face with death due to his alcoholism just two years ago, whether he would be able to play guitar again was questionable. “I knew what I was supposed to do, but I couldn’t quite make my fingers make the chords,” he said in an interview with Rolling Stone.

After nearly two months of practicing every day, Whibley gained back his control and began working on 13 Voices, the band’s seventh album since their beginning, 16 years ago. With band members fading in and out over the past 5 years since their last release, Sum 41 has become a 5-piece for the first time since 1996. With the powerhouse combination of Whibley on vocals and guitar and guitarist, Dave Baksh (who has returned after parting ways 10 years ago), the band has delivered a killer album that points them in a new direction, full steam ahead.

13 Voices opens with “A Murder Of Crows (You’re All Dead To Me)”. A ballad infused with orchestral instruments (a reoccurring theme within the album), the track later builds up to a climax of pounding drums and radiating guitars. It’s impossible not to head bang, but be careful, don’t give yourself whiplash because there’s still nine more songs on the album!

A personal favorite, “Breaking the Chains”, opens with cellos and a mixture of violins. What is seemingly a tune reminiscent of a Victorian ball, quickly changes paths and becomes a catchy pop-punk anthem drawing inspiration from punk rock predecessors, Green Day.

The title track on the album is arguably the real kicker and what makes the album stick out. The vocals within the song use the carnival-esque effect, almost as if Whibley was recording through a megaphone. The entire song is the epitome of the band and the perfect title track for the album. The chorus is catchy and classic Sum 41, however, the real standout is the minute long heart pounding instrumental introduction.

Throughout the album, it is clear to see that Sum 41 has been following along on the path they previously ventured off on in Screaming Bloody Murder. The days of “In Too Deep”pop-punk Sum 41 are long gone and the band is full speed ahead into Maiden-worshiping rock n’roll that sounds straight out of the next Guitar Hero.

However, Sum 41 has shown maturity and growth over their years as 13 Voices is very similar to their last release, perhaps just polishing the imperfections and tightening the loose screws. But, they have also extracted bits of classic Sum 41 and dropped them in strategically throughout the album in order to create something new. Though 13 Voices is arguably not Sum 41’s best album yet, they have shown great talent and success with their now 5-piece band.