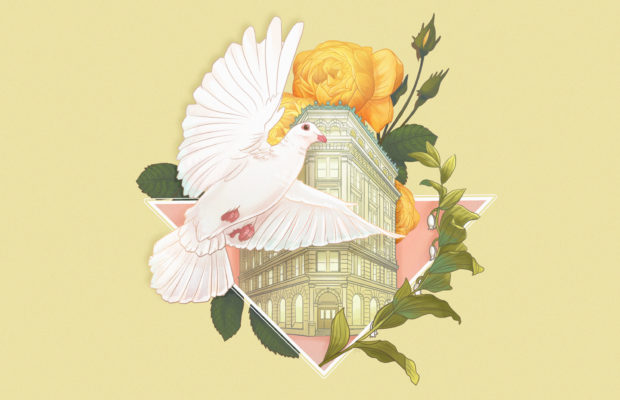 William Ryan Key, former frontman of pop-punk darlings Yellowcard, is set to release his second solo EP Virtue later this month. With Virtue, Key inhabits a remarkable space for an artist emerging from the enormity of his past. While the lessons of his time in Yellowcard are evident through skillful musical production and polished lyrical voice, there is no doubt that Key has found a place all his own: equal parts delicate and impassioned, visceral and practiced. Make no mistake, William Ryan Key the artist is an entity all his own.

The EP opens with “The Same Destination,” a hauntingly beautiful piano-driven instrumental track. The ambient piece conjures a feeling of floating through space, as a shimmering synth phrase gradually swells and softens. Though less than two minutes, the song is deeply expressive and sets a fitting tone for the rest of the EP.

“The Bowery” takes its inspiration from the iconic music venue, an ode to the state that has clearly had an impact on Key. In fact, references to New York are so frequent, the six song collection seems to double as a love song to the state itself; the silent observer to every fleeting yet forever moment of Key’s evolution. Within the song’s lyrics, Key is especially vulnerable. Lines like “I don’t shine like the others do,” “who do I think I am?” and “I am unconventional” all highlight the inherently transitional, at times uncomfortable process of forging one’s creative path. A repeated refrain of “with this truth, I come to you” serves as a microcosm to the EP and Key’s solo journey; through moments of uncertainty, Key presents his listeners with his truth. And what a beautiful thing it is.

Title track “Virtue” is everything that the EP does best, and demonstrates Key’s keen understanding of restraint. The lyrics follow the aftermath of an intense breakup, where the other person has moved on long before the narrator is ready. Gentle guitar and atmospheric synth begin the song, highlighting the fragile calm that comes with grieving. Key’s words are nothing short of poetic, with lines like “still not out of the cold, but I’ll pretend that all of this had a warm and graceful end” evoking every painful emotion of picking up and trying to move on. Midway through the song, the sustained crash of drums adds an epic, soaring element to an initially subdued song. The chorus then repeats in echoing layers, with the song ending in a spoken word seemingly Russian recitation over ambient notes. Though no explanation is given for puzzling change, the meticulous detail poured into this album lends itself to the prediction that it is entirely fitting.

The triumph of Virtue lies in its coexistent vulnerability and intensity. Key’s masterful lyricism sheds all pretense and delivers us directly into the pulsing heart of his words. From the gauzy harmony of “Mortar and Stone” to the fervent declarations of “No More, No Less,” Key’s words deliver a sense that the listener is peeking into an intimate, vivid storytelling. Indeed, Key says of Virtue: “The recording sessions were very much driven by capturing what I felt right in the moment.”

With only six months between his first solo EP Thirteen and Virtue, Key has shown impressive growth as a solo performer. This growth comes not from musical ability (anyone who has listened to a Yellowcard song knows Key is not wanting for talent) but from confidence. Where Thirteen was largely stripped-back and minimalist, Virtue is Key’s artistic presentation to his listeners in a space of sure-footedness not seen before. Each and every song on Virtue‘s tracklist brings a new, yet always fitting, element into Key’s solo arsenal. The transition from established band to solo artist is a journey undoubtedly full of uncertainty. With Virtue, William Ryan Key shows his listeners just how precious that uncertainty can be by taking us along for every step of it.

Virtue will be released on November 30th, and is available for preorder here.