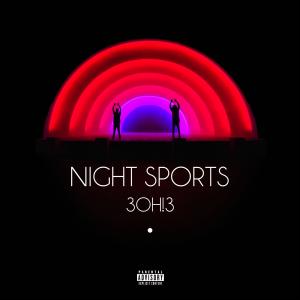 After a long awaited three years, Colorado-based 3OH!3 are set to release another full-length studio album entitled Night Sports. The electronic-punk duo, who gained immense fame after dropping “Don’t Trust Me” back in 2008, will be dropping their next album Friday the 13th. Years after their success, their sound hasn’t changed much, rather than maturing to a much more put together sound.
In typical 3OH!3 fashion, their newest album has some very mature lyrics, but what’s new? “Don’t Trust Me,” which definitely was the definition of explicit, went 3x platinum in the states and reached #7 on the US charts. Growing from their sound that they were so well known for, the new album is much more defined, put together, and has more of a unique sound. Combining electronic with both a hip-hop and heavier rock sound, this album is one you definitely need to check out.
The duo recently released some of the songs off the album as singles, and these give a great insight into the rest of the album. This includes “My Dick,” “Mad at You,” “BASMF,” and the most recent single “Hear Me Now.”
Starting out with “Fire in the Heavens,” the recent Fueled by Ramen signees start off the album with a hella catchy song. It reminds me of a song that would play at the beginning of a concert, when the band is waiting for their moment to come on stage. It’s a fantastic, electronic-rock song that is a great way to introduce the new, mature sound of 3OH!3.
I am a huge fan of one of the singles – “Mad at You.” With a catchy beat right off the back, it left me in awe the first time I heard it. The verse, though not necessarily my favorite genre, turns into a upbeat-EDM based chorus. The chorus gives off the vibe of being at a rave, while the verse’s vibe is more of a rap/hip-hop concert.