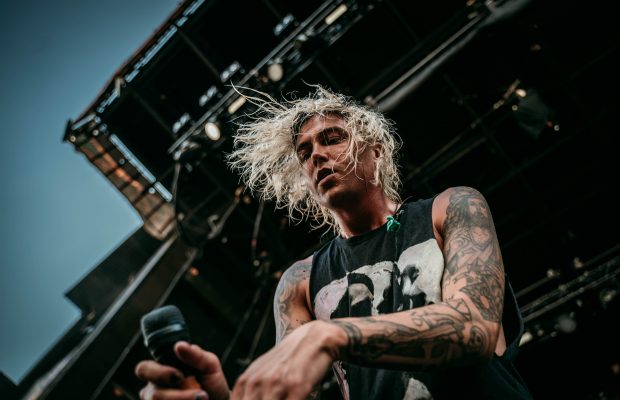 The day that I was waiting for finally arrived. The Rockstar Disrupt Festival swung through the Mile-High City. The unique part about this tour is that every act has their own set times. Fans do not have to scramble from stage to stage to catch their favorites. Unfortunately, due to some delays with the press badges, I was unable to capture Citra and Hyro the Hero. We were finally able to enter the Amphitheatre During the last few minutes of Juliet Simms set. Their sound was fantastic but what made them more enticing was the retro vibe they have going on. Juliet’s blue guitar made my jaw drop. They were a different feel than the rest of the lineup but absolutely perfect in their own unique way.

The next band on the bill was Nashville Native’s Memphis May Fire. Every time I catch one of their sets, they continuously get better. There were only a handful of songs for their time slot but they filled those with the perfect amount of older and newer tracks. Starting with The Old Me, throwing in their radio hit “Heavy is the Weight, and finishing with “The Sinner”, they had heads consistently banging.

During the changing of sets, awaiting Four Year Strong to play, the entire crowd stared into the angry dark clouds above us. We all anticipated a torrential downpour in the open amphitheater. The well-known pop-punk band started chanting their first line in “Maniac (R.O.D.) and the fear of getting drenched dissipated.

Sleeping With Sirens came out and ensured that the energy was at the peak of the day. This is one band that is a must-see, live. Every single member, but especially vocalist, Kellin Quinn, get super into the music. The Floridian band opened with one of their older hype up songs “Kick Me.” They didn’t disappoint Older SWS fans. Kellin showed off his talent by adding on extra acapella runs to the end of “If I’m James Dean, You’re Audrey Hepburn.” Saying that his voice gave me chills would be an understatement. Awaiting their newest album, Gossip, they played with one of their newest releases “Leave It All Behind.” I am truly looking forward to that record dropping.

Immediately following, Atreyu took over and blew everyone away. They took me by surprise and played their cover of “You Give Love a Bad Name.” Their backlighting and smoke really amped up the entire performance. Guitarist Dan Jacobs and bassist Porter Mcknight, both took a side of the stage and interacted with the crowd. They eventually joined together are started synchronizing movements with their instruments which was an absolute blast to witness. This was my third time catching Atreyu and Immediately following their set, I was ready to watch for a fourth time.

Circa survive was next on the Lineup and I have been looking forward to seeing them again since 2010. I had my hopes high and they honored every single one. Vocalist, Anthony green, jumped into the crowd while singing “Act Appalled” and stayed there for the entirety of the song. The love that this band shows for their fans is unreachable. Not only do they sound flawless but they are ridiculously fun to watch on stage. The swinging cord and suave dance moves are very eclectic and fill the room with an aura that makes you feel the need to move. I was slightly sad when their set ended.

I was able to pull myself together moments later when the giant stage flag dropped and I saw a bright red heart hanging from the top of the stage. The Utah Veterans “The Used”Jumped on that stage as if it were their first and last time. It seemed they took every popular single and added it to their set. Not a single person was disappointed and not a single person was standing still. I think we all lost our voices on this one. I immediately felt like I time-traveled back to 2002 and watching Steven’s Untitled Rockshow. They did something special that I hadn’t seen in quite a long time. They pulled a fan on stage, but not just any fan, it was a little kid. The look on his face was priceless and I can guarantee it is a day that he, nor his parents, will ever forget. Especially since Bert (Vocalist) made him flip off the crowd…whoops. They ended their set with my personal favorite “A Box Full of Sharp Objects.”

Up next we had Thrice. This is a band that I have had on my playlists growing up but I have never had the opportunity to see them live and I feel like I missed out. They are fantastic. Their lighting and smoke had to be my favorite visual set of the night. The Reds and purples really omitted the emotion of the messages embedded in their songs. Vocalist Dustin Kenrue’s voice was nothing short of perfect throughout the entire 30 minutes. The California Post- Hardcore band was a crowd a favorite and the perfect group to play right before the final headliner.

Everyone in the Amphitheatre was burned, hungry and started looking particularly sleepy after the long day. Sum 41 were the last ones to bless us with their presence and they woke the crowd right up. They opened with “The Hell Song” While jumping around the stage. They continued with fan favorites “We’re All to Blame,” “In Too Deep,” and “Fat Lip.” They were the second wind that we all desperately needed.

After a full day of singing, jumping, eating and repeating, the crowd scurried away to their cars (except for me who lost my car for multiple hours but that is a story for another day) and I can guarantee the comments on the way home were nothing less than positive. I know there are only a few dates left of the tour but It is the smaller Warped Tour that a lot of us are missing.