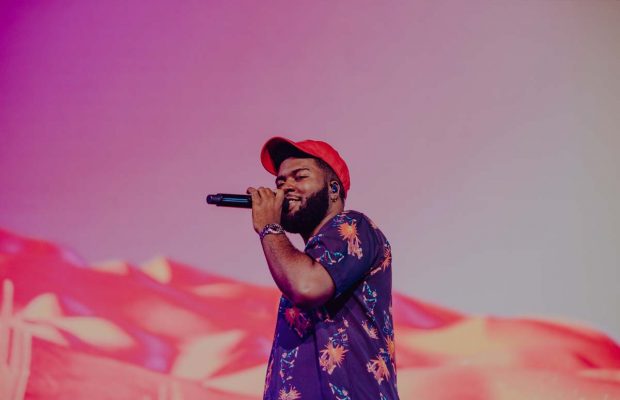 On Sunday, July 14, Khalid brought the Free Spirit Tour to Dallas, TX at American Airlines Center. Clairo, an upcoming bedroom pop artist, opened the show for him and sang songs including her newest single Closer To You to prep the crowd for the Free Spirit Tour. Khalid’s set opened with a visual montage on a background screen that included his outline and aesthetics from the album, Free Spirit. He then opened the show with 8TEEN, one of the singles from his debut album, American Teen. The set consisted of three panels of video screens, one acting as the floor, one acting as a background, and one acting as a ceiling. During the songs, different visuals matching the aesthetic of the song’s original release played on said screens, making the stage come to life even though Khalid and his dancers did a pretty good job of that themselves. He then transitioned into Twenty One. The juxtaposition of these songs showed the journey that Khalid has gone through these past three years in his rise to global fame. The song Bluffin’ stripped away the heavy production and featured Khalid on a stool with a simple silhouette behind him on the screen. One of my favorite parts of this set was that Khalid had a lot of funny banter with his dancers and even got the crowd involved into it. Khalid performed songs from his Suncity EP, which was basically a preview of the Free Spirit album. He transitioned Motion perfectly into Better, one of my personal favorite Khalid songs. Later on in the set, he performed American Teen, one of his biggest singles thus far, and even added a half time breakdown and key change. Another Sad Love Song marked the end of Act 1 of this show, and Khalid walked off stage and left the crowd watching a video about his journey which featured the quote “I don’t feel like I am a free spirit but I am on the path to being a free spirit.” He then sat in the middle of the stage and sang Coaster, Intro, and Angels. The pace picked back up with Winter, and Khalid finished the show strong and performed singles like Love Lies, Talk, Silence, and Young Dumb and Broke, during which he brought two unsuspecting fans on stage to dance. Khalid closed the show with Saturday Night, and left American Airlines Center speechless after a 29 song set with incredible production and stellar mixing.