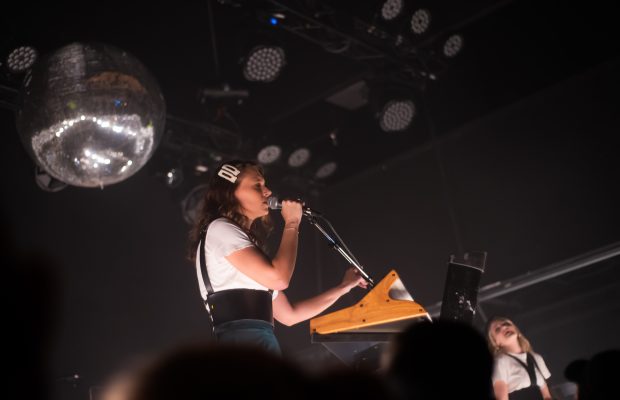 Aly & AJ are more than they seem. You could say ten years away has changed the band, but seeing them live you’ll learn that the sister act has never been typical. Waiting in a line for several hours before doors open in the hot Houston sun I wasn’t sure what to expect for the show. I was very familiar with the band’s debut work from my pre-teen years, but I lost track of them when I got older. I remember they were briefly performing under 78violet, but at the time I wasn’t really keeping up with music. As a fan to the CW show iZombie I have a love for member Alyson Michalka as an actor. I was excited to attend the Sanctuary tour to get a feel for the bands has been up to.

They brought along Amors to open the tour. Amors is a funky alternative pop band from California. With their lead vocalist and tour drummer dressed in bright yellow, they pleased the really hyped up crowd. There isn’t a lot of information on the band online, so I’ll just have to go off their music to tell you to want they’re about. They’re about sick beats and catchy lyrics. Their song “DOA” got an excited reaction live and was stuck in my head afterward. Lead vocalist and guitar player Olen Kittelsen is a delight to watch on stage. I’m looking forward to listening to them more and hearing what they come up.

It wasn’t long after Amor’s finished up that Aly & AJ took the stage. With soft candle lighting a warm glow on the stage they opened with the song “Church” from their new Sanctuary EP. The song set such a good tone for the evening. Hearing people sing the lyrics with tears in their eyes I was getting a good sense about what their new music was about. A beautiful thing about this tour was that they brought along the LGBT+ charity Trevor Project, which I thought was beautiful to do during pride month. The team-up with Trevor Project had a contest to hang out with Aly & AJ after the show, I’m sad to report that I did not win.

I discovered while watching the sisters perform live that their music was never the typical bubblegum Disney pop. Not to diss that music, I loved and still listen to it, but besides a handful of covers, Aly & AJ were always rock stars in the making. I realized this once they played “Chemicals React” that it fits so perfectly with their current music. Aly and AJ were always coming out hits; they were just dismissed because they’re a connection with Disney. This rock star status was solidified in their performance of “Rush” as the band went into an extremely heavy outro with such high energy leaving that the crowd wanted more. They left the stage and returned for an encore as a crowd chanted. The girls graced us with several more songs, including a beautiful cover of Kacey Musgrave’s “Slow Burn”. The show officially closed out with their hit “Potential Break-Up Song” one of all my time favorite songs. I have a new appreciation for Aly and AJ now that I’ve seen them perform live. I’m happy that they’re back in the swing of things. From the look of the crowd, there is no shortage of fans for this band that took about ten years off. I’m looking forward to what they bring in the future.