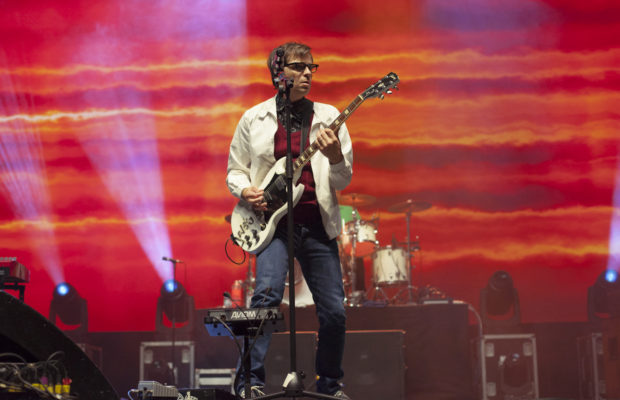 Following Weezer ’s release of “Pacific Daydream” just 1 day prior to the event at Wembley,
expectations were high for the American Alt/Rock, Power-pop household name and they did
not disappoint.
Support band The Orwells started off the night with a bang! Unique and strange band but
something really drew me to listen to their whole set. They were quite young and very
talented, their songs punchy and punky. The lead singer had a gritty and booming voice
which filled up the SSE Arena and brought joy to the standing crowd which was filling up
pretty quickly during their set. Although they were powerful, their songs at times flowed into
the next with no real distinct rhythmic changes or progressions besides the singer’s very
flamboyant and expressive behaviour. They ended their set with the singer walking off
half-way during the song and a very explosive musical outro which resulted in the guitarist
breaking a string, and the second guitarist taking the lead vocal line- which he basically
screamed out.
During the intermission, the venue was setting up for Ash , an Irish Alternative/Rock band
with a huge following. In the halls you could feel the audience buzzing getting ready to see
Ash and then Weezer. The venue was filled with people of all different ages who had come
to reminisce over some of their favourite bands growing up. Everyone was in good spirits,
there were loads of beer, loads of males and lots of belching. Ash opened their set with a
space-themed countdown and you could almost feel everyone jumping out of their seats.
You could see their loyal fans sing along to almost every song of theirs. Their theme was
very futuristic with impressive lights and quirky backgrounds projected throughout their set.
You could really feel that they have been together for almost 25 years because they were
incredibly tight and performing seemed like a breeze to them.
Nothing compared to what was to follow. An incredible set by Weezer which had everyone in
the arena bursting with joy and excitement. Weezer are one of the most popular
Alternative/Rock/Guitar-Pop groups to emerge in the last 20 years and you could really feel
that in the venue. 17 million worldwide sales and 9.2 million in the US alone, can’t be wrong,
and with a band as unique as Weezer I was certain their set would be top-notch. Their
devoted fans waited impatiently for them to come on stage. Orange Halloweeny balloons
with LED lights in them were being thrown around in the crowd further electrifying the
already excited crowd.
Weezer started off their set with “El Scorcho” off their second album and the audience
immediately started dancing and jumping to the rhythm of a song they knew so well. The
projector screen showed animated and colourful balloons bouncing around which further
added to the atmosphere of the show. A couple of songs followed from their first album
which was a triple-platinum success and throughout their set they went back
and forth between their discography which made the style change a lot throughout the
evening as they were travelling through different eras of their music. Lead singer Rivers
Cuomo said it was their first time headlining Wembley and that he felt like the “King Of The
World”. Songs such as “ My Name is Jonas ” from the debut album were received with a lot
more enthusiasm than others from the later albums, with fans literally jumping out of their
seats to dance to the classic Weezer songs that were imprinted in their hearts, whilst the
newer songs brought a different vibe to the evening. I noticed a lot of their loyal fans sat
down, sort of waiting for this phase to be over. Despite this, the band’s energy and
connection to the crowd was always there.
The new album has a more funky, laid-back vibe and I really enjoyed it. The band
played “ Feels Like Summer ”, an anthemic feel-good summer song which the younger
generation know all-so-well, but had the more mature fans less excited. They were dressed
in their own distinctive way and were exuding happiness and incredible musicianship. You
can tell they have absolutely honed their craft over the years and performing together is
second nature to them.
Throughout the show they had very artistic animations and videos projected behind them.
My favourite moment was when they played “ Thank God for Girls ” off their White Album and
on the screen there were images of different beautiful women from different cultures which
then built up to a slideshow of famous influential women. The late Amy Winehouse was on
screen, Adele , Emma Watson , Helen Mirren , Michelle Obama , Wonder Woman and more.
As a woman myself, this was very empowering and I thought it added a nice sensitive touch
to the whole evening.
I have never been to a show which radiated so much love and energy between the fans and
the band. Everyone were in such a positive mood which added to the colourful atmosphere.
Well, not everyone, security stopped quite a few die-hard fans from crowdsurfing on several
occasions. You could see how passionate these guys were and even when escorted outside
they were still belting out their favourite lyrics with their hands in the air. Weezer ended their
show with the hit “ Say It Ain’t So ” and an encore of “ Buddy Holly ” which exploded into
masses of confetti flying in the air.
It’s safe to say it was a thoroughly enjoyable evening, Weezer delivered an incredible show
with support from 2 amazing bands. Even though Wembley was not sold-out, there were
about 7,000 (according to the band) hardcore, devoted fans who looked like they had the
time of their lives.