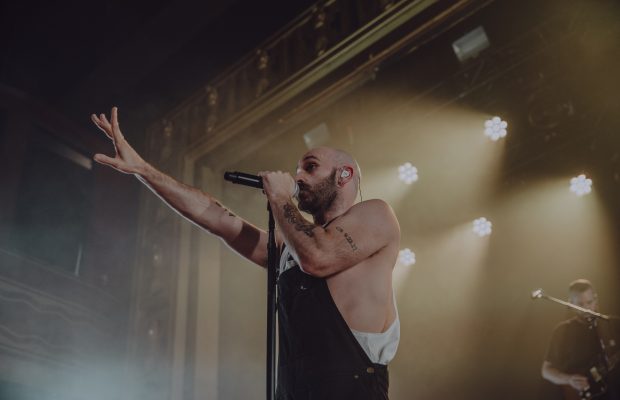 The first time I saw X Ambassadors, they were just called Ambassadors and it was in a tiny venue on South Street called the TLA in Philadelphia. The year was 2011 and they were the opening band for the evening. Going into it, I had no idea who these “Ambassadors” were, but the second they began performing I was entranced and blown away. Over the near decade since I first saw the band they added the infamous X in front of their name and have climbed the charts to become one of the hottest bands out there. With the release of their third album, Orion, the week prior, X Ambassadors brought the Orion Tour to New York City’s Webster Hall for a killer sold out performance.

The newly refurbished Webster Hall was recently transformed from a city relic to a new, modern and industrial music venue and I stood in the photo pit ready to get the party started with X Ambassadors. The completely sold out venue was packed to the brim when the lights went dim. Bright yellow rings flashed on a curtain at the back of the stage and lead vocalist, Sam Harris, entered the stage, leading his brother Casey Harris to his keyboard. Drummer, Adam Levin took his seat behind his drum kit and wasted no time. Instantly Sam began with “HEY CHILD.”

Sam’s bright orange jacket was flying across the stage while Levin passionately hit the drums and the beats radiated through Casey, on the keys. The energy that X Ambassadors brings to their performance is unmatched. Sam Harris’ infectious smile radiated throughout the venue while the band played hit after hit including “Jungle”, “Renegade” and “BOOM.”

It is always such a treat to be a fan of a band for so long and get to see how the band progresses throughout their musical careers.