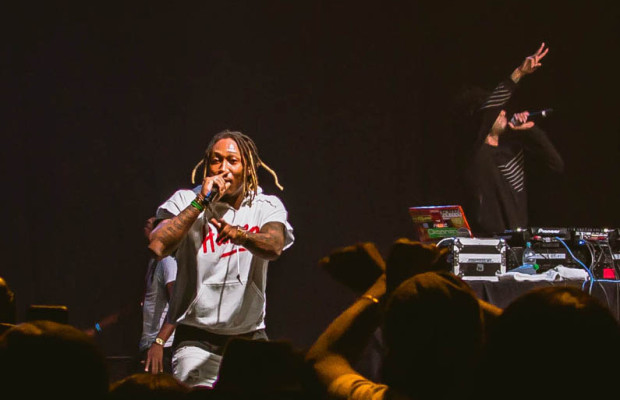 On Friday September 25th, the Freebandz Fest came to Baton Rouge’s River Center in full force. Headlined by rapper Future and other hip-hop artists August Alsina, Rocko, and iHeart Memphis, the event was a sure success. Hip-Hop superstar Fetty Wap was also expected to perform, but for reasons unknown did not take the stage. However, the packed venue can assumingly be attributed to the success of Future’s latest album “DS2” and his mixtape collaboration with Drake “What a Time to be Alive” that dropped just a few days before the concert. Even though there was floor seating and no general admission area, people came down from all levels of the arena to crowd the stage, flooding the floor and definitely giving it a festival type feel. It was also pretty exciting to see hip-hop’s newest dance obsession “Hit the Quan” in person, performed by iHeart Memphis. Louisiana’s own August Alsina also had a stellar performance, complete with a team of dancers, a live band, and an audience member serenaded on stage. He was even recognized with an award from BET and had a meet and greet with a cancer patient on stage as well. The show ended with Future spitting out banger after banger and everybody in the audience packed wall to wall dancing. It was most definitely the biggest thing to hit downtown Baton Rouge in a while. WHAT A TIME TO BE ALIVE.