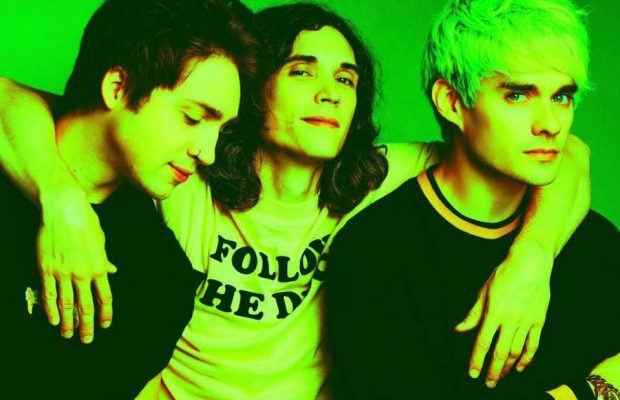 Waterparks recently announced their highly-anticipated new album, FANDOM, out October 11th via Hopeless Records.  They also shared a new single and music video, “Watch What Happens Next”.  The video marks the directorial debut of Waterparks’ frontman Awsten Knight. The song examines the hypocrisy of fandom and success and the struggle to burst past the shackles of labels, genres, and our culture. Unapologetic, blunt, fearless, and filled with the bravado of an artist who is sick of the familiar and ready to flip all conventions for what a song could be, “Watch What Happens Next” pulls no punches and blasts through the void with blind ambition and swagger.
FANDOM, the third full-length from Waterparks (and first on Hopeless Records), was produced by Zakk Cervini (Good Charlotte, Beartooth) and is an eclectic and enigmatic collection of songs that include the aforementioned “Watch What Happens Next” and the frenetic, tornado-like, “Turbulent” that was released in late May. Fans can pre-order the album HERE.
Waterparks is Awsten Knight (vocals, guitar), Geoff Wigington (guitar, vocals), and Otto Wood (drums, vocals). Last year, they released Entertainment, their most successful album to date. Entertainment made an impressive debut on the Billboard Top 200, charting #7 Rock Albums, #5 Indie, #25 Top Current Albums, #18 Digital and #36 Physical. The record was named one of Alternative Press Magazine’s Most Anticipated of 2018 and was produced by Benji Madden and Courtney Ballard (All Time Low, 5 Seconds of Summer).  Since the release of their debut album Double Dare, the band has remained on the road, touring with the likes of ONE OK ROCK, All Time Low, Sleeping With Sirens, Good Charlotte, and more. Radio personalities such as Daniel P Carter (BBC Radio 1) have come forward as fans and the band has been featured on covers of magazines such as Alternative Press, Kerrang and Rock Sound.  You can follow the band and stay up-to-date on all upcoming tour dates, band and album news and music via the following links:
Website | Facebook | Instagram | Twitter | Spotify | Soundcloud | YouTube | iTunes/Apple Music | Deezer | Google Play