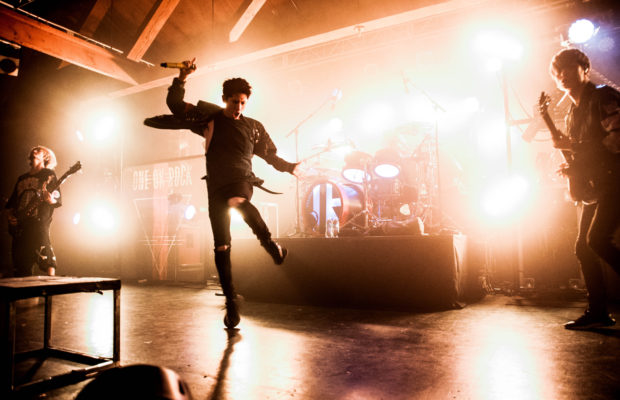 Japanese alt-rock band ONE OK ROCK put on an unforgettable show at the Seattle’s Showbox SODO this week. With a jam-packed room of diehard fans who came with handmade signs and personalized shirts, the excitement in the venue was present the second you walked through the door.

Taking the stage a little after eight, the members of ONE OK ROCK were greeted with shrieks and screams from their fans who had been waiting long for this night to arrive. Opening with “Taking Off,” a track off of their newly released English-speaking album, Ambitions (Fueled By Ramen), each member exploded with energy, performing in-sync jumps and making their presence known on every inch of the stage.

Once you’ve seen ONE OK ROCK live, it becomes instantly understandable why they have attracted such a large fan base in the states in a rather small amount of time. For many bands, making it in the states is hard and sometimes not even possible, but ONE OK ROCK has created the perfect recipe for success – well-written music, infectious stage presence, and sincere personalities to back their image.

Whether spoken in Japanese or English, ONE OK ROCK’s set proved that not only does each member in the band musically bring something to the project, helping to create tight-knit and incredibly performed alt-rock music, but it’s undeniable that lead singer Takahiro Moriuchi has one of the strongest voices the alt-rock scene has heard in a long time.

Between showing off their talent and entertaining the sold out crowd with their incredible stage presence, Moriuchi took multiple moments throughout the night to thank those for supporting ONE OK ROCK, showing the sincere and thankful individuals that make up the band.

Catering to both demographics, ONE OK ROCK played a mixed of Japanese-spoken tracks, as well as English-speaking songs, those in the crowd easily knowing the words to both, proving that they became fans long ago and are continuing to support the band with their new music.

A particular highlight of the night that stood out was their performance of “We Are.” Another track off of Ambitions, the crowd not only seemed to be very excited that ONE OK ROCK decided to perform this track, but they effortlessly started chanting “we are, we are” back to the band without being instructed to do so, showing that they were as involved in the performance as the band was. At some points during this song, the audience’s voices seemed to overpower Moriuchi, cueing him to hold out the mic and let the crowd sing the words back to him.

Closing out the night with “American Girls,” a track that resembles that of early All Time Low (it might be good to mention here that Alex Gaskarth is featured on Ambitions), the night ended on a high with this upbeat and infectious song, fans leaving the venue wanting more from the alt-rock band.

There has been a lot of hype surrounding ONE OK ROCK as they continue to gain momentum in the states and let me just say that they are definitely worth the praise they have been receiving. As a Japanese alt-rock band with a newly released English-speaking album and a dedicated fanbase that resembles that of early One Direction, the interesting circumstances surrounding this band are intriguing enough. However, for those out there wanting a little more musical evidence to back the praise, it can be said with confidence that ONE OK ROCK are an alt-rock band with quality music and even better stage presence that cannot be ignored.

So, wherever you are in the world, if you find ONE OK ROCK coming to your city, it may be a good idea to attend the gig and see just what all of the hype is about for yourself, you won’t be disappointed.