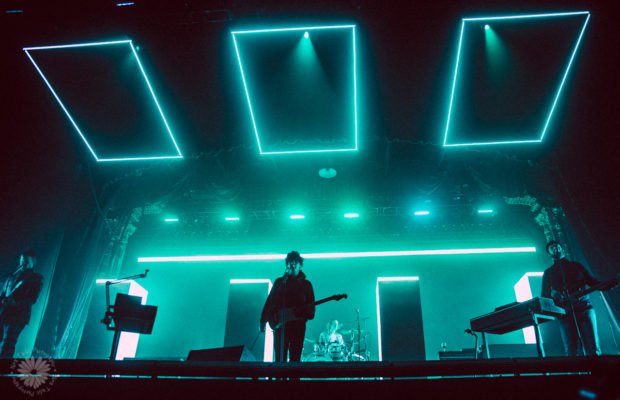 A funky pop sensation that is sweeping the nation, The 1975 recently stopped in Chicago to headline the Aragon Ballroom for their current tour supporting their most recent release, I Like It When You Sleep For You Are So Beautiful Yet So Unaware of It. November 13, the band performed a sold out show to fans who drove from near and far to sing along to every word of every song.

Doors open at 6 PM, and fans are wrapping around blocks of city sidewalks in line to get into the show. One by one they trickle in the door, and the buzz in the room grow louder and louder. An hour later, opener 070 Shake takes the stage. Shake, a member of hip-hop/rap collective 070, is collected and cool, with carefree energy and ferocity far past that of an average nineteen year old. She manages to get the crowd fired-up and jumping around in seconds, and makes herself quite a few fans. With a short, upbeat set, she does what every opener hopes to do. She entertains the crowd instantaneously. The second she walks off stage, the buzzing chatter begins again.

When a band performs on foreign soil to a sold-out venue and fans lining up prior to 2 PM, there must be a reason for it. Once The 1975 hits the stage, the reasons are crystal clear. It is very rare for a band to put just as much work into their visual art as their music, and that seems to be where quite a bit of the appeal of The 1975 lays. Their music is all funky pop with a very retro feel, and their live performance feels just as vintage. The band uses a slow, humming intro to build up suspense in the crowd, and then leaps right into bouncy hit single “Love Me.” The opening note of Love Me, their stage lighting bursts from black and white into technicolor pinks and purples and blues. Fast-paced songs and even faster-paced LED lights captivate the audience as they look on in almost a trance of sorts. Vocalist Matty Healy’s spunky attitude and vibrant, Michael Jackson-like dance moves, mixed with his sly comments between songs, are the perfect concoction to capture anyone’s attention and interest.

The band performs a smooth mix of songs off of their debut, self-titled album, their most recent release, and sprinkles in a few fan favorites off of their older EPs. Songs like “Loving Someone,” “Girls,” and “Sex,” get the whole room turned into a dance party, while songs like “Robbers” and “fallingforyou” encompass the crowd’s entire being. “If I Believe You,” manages to turn five thousand people into a gospel choir for a few short minutes, and those few minutes seem so timeless. Finally, the band rounds out the night with “The Sound,” which literally lifts the room off its feet. Black and white strobe-lights make the room feel unreal, and the crowd’s level of energy does, as well. A phenomenal end to a show. The 1975 is definitely worth seeing, and definitely more than once.