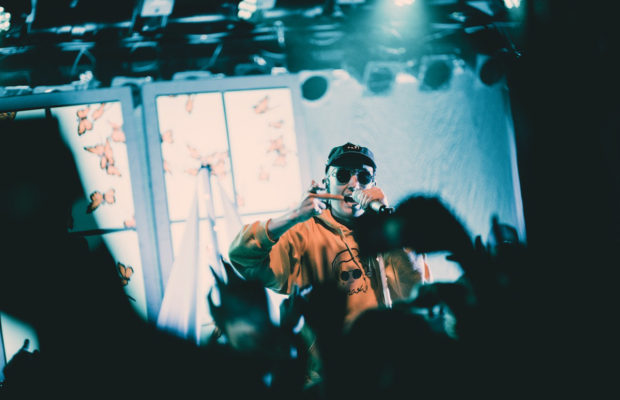 Gnash’s “Sleepover Tour” arrived at the Paradise Rock Club in Boston on friday night, with a lengthy and diverse lineup, including MAX, Goody Grace, Sweater Beats, and more. On the seemingly normal and rain-filled spring evening, fans stood prepared with umbrellas and armed with enthusiasm as they waited for the venue’s doors to open.
The tour, which continues with more shows across the US, boasts a strong sense of community. Many of the artists have collaborated on a wide range of tracks; and the lines between sets were blurred as each musician joined one another onstage to perform these collaborations. The audience was especially excited when, towards the end of the night, Gnash and MAX performed their notable success, Lights Down Low.
Tulpa & Blankts, myboyjon, and Imad Royal warmed up the audience with sets of songs completely unique from one another; however, the night reached a turning point when Goody Grace took the stage. The venue began to fill with noise as the majority of the audience eagerly sang along to each and every lyric.
After MAX and Sweater Beats, the stage transformed into an idealistic childhood bedroom. With a pillow fort, large windows depicting virtual stars and clouds, and a dresser doubling as a DJ booth, Gnash turned the Paradise Rock Club into an intimate and comfortable venue. As the audience passionately chanted his name, the Los Angeles based artist finally ran onstage. The remainder of the evening was overflowing with intensity and joy, exuding both from Gnash and reciprocated by the audience.