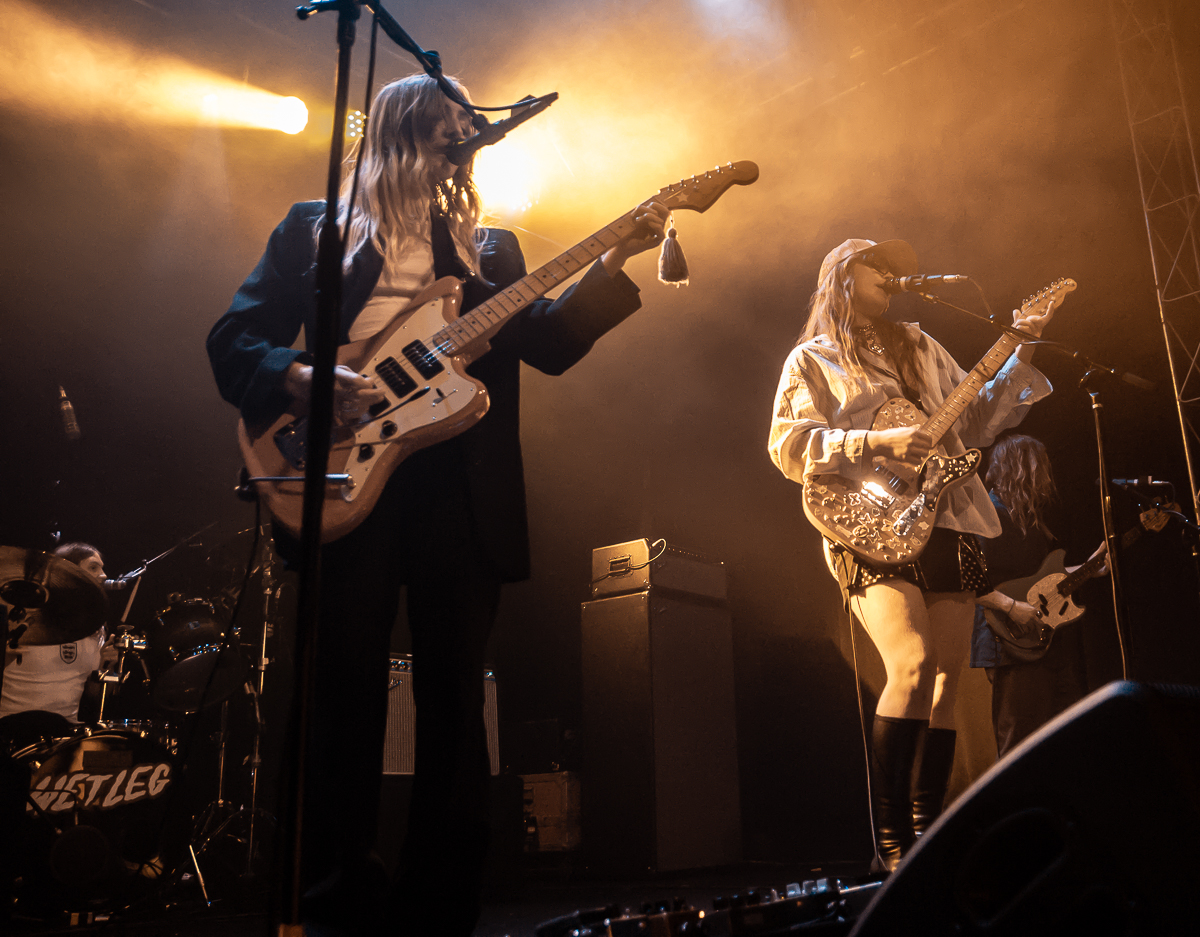 British indie rock band Wet Leg brought their current US tour to Louisville on December 4th to a sold out crowd! The line was long, with fans eagerly awaiting the opening of doors to secure their spot at the barricade. Having only released their debut single “Chaise Longue” in June of last year, Wet Leg has quickly gained a rapidly growing fan base and a string of sold out shows! Opening the show this evening was avant-pop duo Faux Real, comprised of Franco-American brothers Virgile and Elliott Arndt. With a very DIY aesthetic and refreshingly different live experience than what I have witnessed before, the brothers mesmerized the crowd with their dance moves, which were beautifully choreographed, jumping around the stage, engaging with the crowd, and a bit of saxophone thrown in the mix! Towards the end of their set, they got out into the crowd, after instructing everyone to turn on their phone’s flashlights, and sang their last song from the crowd. I imagine these guys will no doubt be gaining more popularity in the coming months!

Closing out the evening was Wet Leg. Comprised of Hester Chambers (lead guitar/backing vocals) and Rhian Teasdale (lead vocals/rhythm guitar), and joined on stage by their touring band Henry Holmes (drums/percussion), Ellis Durand (bass/backing vocals), and Josh Omead Mobaraki (guitar/synth/backing vocals), the band ignited a passionate response from the crowd from the first note played. Starting out with “Being In Love”, the band performed a set of 12 songs, including “Wet Dream”, “I Don’t Wanna Go Out”, “Too Late Now”, and “Angelica”, with the crowd cheering, dancing, and singing along to every word. Chatting a bit with the crowd between songs, Rhian did a crowd check early on, asking everyone how they were doing, before doing a check in with the band. She then joked that “Now that everyone is pumped up, I’m going to play a very sad song!”. She later asked everyone “How do you guys feel about screaming? You sound pretty good! Luckily, now is your chance! Show us what you’ve been practicing!”. Thanking the crowd for making them feel so welcome so far away from home, they ended their set with their hit song “Chaise Longue”, with the crowd giving them a grand farewell in response! It was a fun and euphoric evening of music, dancing, and good times all around!