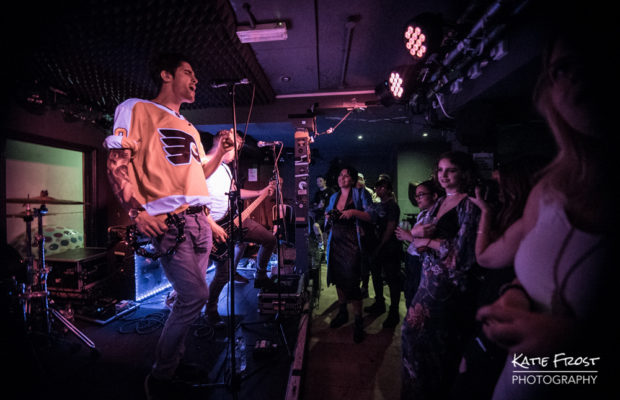 On Thursday night I headed to Hope & Anchor in Islington to see Witterquick play the first show of their four-date UK tour. Despite living in London for 30+ years, this was my first time at the 80-capacity venue (which lies beneath the Hope & Anchor pub) and I instantly loved it; what a great little venue!

First to hit the stage were alt-rock five-piece Liberty Lies from the Black Country (West Midlands), who got the sold-out evening off to a great start, opening their set with “Undivided” from their 2015 EP Fracture. This was my first time seeing the band and I really loved their sound, plus they had great stage presence. Shaun was a powerhouse on vocals and every member of the band was gave it 110%. A personal highlight of their set for me was their huge and anthemic most recent single “Mouth Breathers”. Liberty Lies ended their set with 2016 single “Are You Listening”, and I am certain they gained a few new fans, including myself!

Next up were four-piece indie-rock band The Kaizens from Devon. Like Liberty Lies before them, The Kaizens were a band I had never seen before but I was instantly captivated by their sound. Their songs were heartfelt and their live performance was raw and passionate, and it would have been hard not to bop your head to their brilliant tunes. The Kaizens ended their set with fan-favourite “Whiskey & Wine” from their most recent EP of the same name, and it was great to see people dancing around the room, which got everyone dancing along. Tom’s vocals perfectly matched the band’s indie sound, which I think would appeal to a wide range of music fans.

Main support on this tour were alt-rock / pop-punk trio Everything Aside from Coventry (who we recently ran an Artist Spotlight feature on). Despite there being just three of them on the stage, the sound created by Kate, Kris and Nathan was just as huge as the four and five piece bands before them. Most recent singles “No Mistakes” and “Layers” sounded massive, as did their their fantastic covers of “St Patrick” by PVRIS and “Hard Times”. The band also played a brand new (as yet untitled) track which I cannot wait for them to release so that I can have it in my ear-holes on a regular basis.

By the time headliners Witterquick took to the stage the room was packed and spirits were high. This was my first time seeing the Exeter five-piece and I enjoyed their style which, for me, had flavours of Young Guns and Mallory Knox, but with a unique Witterquick twist…including some great tambourine work by vocalist Will. Witterquick’s tracks had some great melodies which went down really well with the crowd. They played a brilliant set including their most recent single “Bubblegum” and “Rise” from their debut EP Beneath The Spinning Lights (2016). The band added an extra layer of joy to their performance by chucking inflatable balls and flamingoes into the crowd, which was good fun.

All in all it had been a brilliant