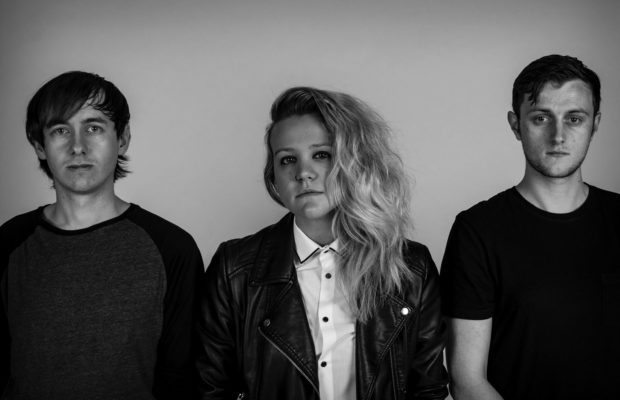 Hailing from Coventry in the United Kingdom, alternative rock band Everything Aside are Kate Thompson (guitar, vocals), Nathan Gummery (bass) and Kris Sharry (drums). The band are currently in the studio working on some new tunes while simultaneously preparing for their upcoming United Kingdom tour with Witterquick, next month. Everything Aside vocalist, Kate Thompson, recently sat down with Stitched Sound to talk about the band’s history, new music and what is in store for them this year.

Let’s set the scene for this feature… Everything Aside weren’t always Everything Aside. The band was originally called The Prophets but changed their name to Everything Aside last fall. “I think we were just ready for a change”, Kate says. “We’ve never been the kind of band to shy away from making a step forward if we think that it’s going to benefit us in some way, and that was just one of those things.” However, you might be thinking that the name change had a deeper meaning to it than it actually did – “it’s almost as if bands have to have some form of “aesthetic” to be taken seriously. It can be really hard to find that balance between being taken seriously but also staying true to yourself” says Thompson.

Many bands often struggle with the idea of inspiration and for creative individuals, it can be detrimental when you hit that wall often referred to as “the creative block.” However, Everything Aside explain that the majority of the inspiration for their songs draw from real life situations. That being said, the band also finds a lot of inspiration in other unsigned bands… “going to other unsigned shows as a musician is so important” explains Kate. “I can’t stress the important of bands working together as a unit anymore if I tried, the more we help and inspire each other, the happier everyone will be.”

Following the rebrand in November of 2017, Everything Aside was flowing with inspiration and began to release new songs that they had been working on. The first single that the band released, “No Mistakes”, was originally a massive 64-piece orchestral composition written by Everything Aside drummer, Kris Sharry. “We loved the song and spent months working on it to turn it into something that sounded like a song we could release” says Thompson. The sound and lyricism of the single are perfectly in line with each other as “No Mistakes” is a song about a loved one experiencing dark and dangerous thoughts, causing that individual to push people away. “That can be a really scary situation for everyone involved” Kate explains. The visuals that pair with the song are extremely moody and somber, but in the best of ways as it allows the viewer to focus on the talent of the band members themselves. You can watch the music video below:

The following single that the band released was “Layers”, a track that is the polar opposite of the previous song from its sound, to its visuals to its lyricism. The up-tempo, typical pop-punk sounding song discusses a feeling that many of us are familiar with. “Layers” is a track “about being done with someone’s shit and being strong enough to walk away from them” said Thompson.

Following these two singles, the band has shared that they are currently working on a six track EP. “I won’t give anything away at this point because I want this to be the best music people have ever heard, but take what you want from these songs when they’re finally released – laugh, cry, dance, whatever makes you feel alive” Thompson says.

Outside of what the band has in store for the future of their music, connecting with their local community has been an important part of who they are. Everything Aside recently headlined the busiest day of the 2018 Coventry Pride Festival – what is perhaps their biggest moment so far, posting on their Facebook page “Thank you to all…for making it one of the best shows we’ve every played” When looking back on the day, Kate shares “That was just insane and we’re so grateful to Coventry Pride and all their wonderful team and crew for making it such an amazing experience for ourselves and everybody else involved.”

A common misconception in the industry is about unsigned bands and why some bands choose to remain unsigned and others actively look for labels. That discussion aside, it is clear that Everything Aside – no pun intended – are turning their focus on working in the metaphorical music industry trenches to create a name for themselves and garner a healthy following around Coventry. It can be easy for bands that fall into the harder music genres such as pop-punk to be “pigeonholed”, as in limit their fanbase to only individuals that enjoy a harder style of music. However, through the diverse range of covers that Everything Aside have managed to offer listeners, it is clear that they are escaping that threat.

The band have covered pop-punk favorites such as Neck Deep, PVRIS and Paramore, but have also shown listeners with a softer side that they are capable of being their favorite band as well, by covering songs like “Believe” by Cher. When discussing the covers that the band has done, Thompson said “Whacking out a cover that everybody knows just to go get everybody moving and grooving the night away should never be overlooked either. And Cher is our Queen. Long live Cher.”

The flexibility of a band is always a very important aspect to a bands career and it is promising to see Everything Aside being influenced by such a genre bending band such as PVRIS – who they stated would be their dream band to tour with in the future. Which, speaking of tours, the band is preparing to embark on a UK tour with Witterquick in the next month. “We’re working on new material so we can play new songs live. We want a new set to play to everybody on this tour, and we’re excited as hell!”

With the tour quickly approaching and the band being in the process of writing their forthcoming six track EP, we’re all getting curious as to what the band plans to be up to for the remainder of the year. Thompson explains the pros and cons of writing music with no deadlines, and how it can be a freeing blessing and other times it can be a real challenge because they didn’t allot themselves enough time. Thompson says that moving forward “We’ll continue to play shows, but we’ll be focusing most of our time and energy into writing these new songs… We want to push ourselves to be the best musicians we possibly can be. We owe it to everybody who has supported us for all these years and never given up on us.”

Few bands in the industry have an attitude that is as grateful, passionate and powerful as Everything Aside and it’s clear to see that that will set them apart moving forward and the band will be set for big things to come! Make sure to stay connected with the band on  Twitter, Facebook and  Instagram and if you’re in the UK, get your tickets for their upcoming tour with Witterquick here.