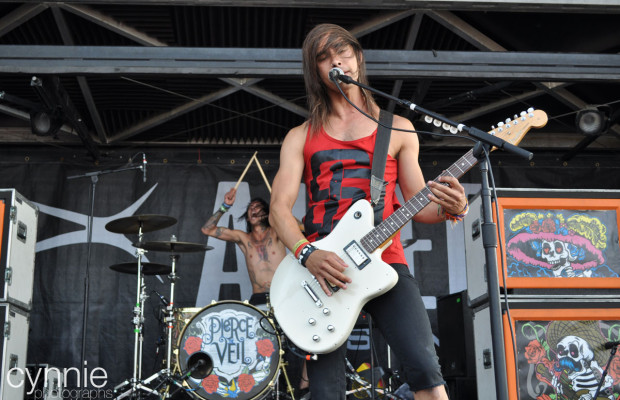 Each summer many music enthusiasts seem to anticipate one (or more) days, where they get to see their favourite bands, and discover many more. It is known as Vans Warped Tour which makes it’s way across the United States and Canada, bring entertainment and live music to many across North America. With more than sixty bands, there is something there for everyone. This year’s lineup included Bring Me The Horizon, Pierce The Veil, The Summer Set, Alesana, Every Time I Die, Pennywise, Sum 41, and much more. Filled with entertaining sets, crazy crowds, and the summer weather, Warped Tour is one tour you don’t want to miss out on. We got to attend Warped Tour in Edmonton, AB and watch some pretty awesome bands.

Dallas powerpop band Artist Vs Poet headed out on Warped Tour this pas summer playing the Glamour Kills stage. They started off with a great intro, getting the crowd pumped up with “Rollin” by Limp Bizkit. Their set was very entertaining, energetic, and fun. Getting their crowd involved with jumping, and with songs that are easy to dance to, the crowd was moving in no time. I give Artist vs Poet so much credit for putting on an fantastic live show, and I myself found it hard to stand still – not that I did.

Starting off with “Car Crash”, I knew it would be one a great set to watch, I had a feeling they would be energetic, and that made my experience better than I expected. Closing up the afternoon with “Damn Rough Night”, Artist Vs Poet did an outstanding job of putting on a live show.

You Me At Six

With an already big fan base that seems to be growing every day, You Me At Six released their new album Hold Me Down in January of 2010. The response from Hold Me Down was fantastic, and the band headed out on Warped Tour this summer playing the Altec Lansing Stage.

As soon as I saw the crowd fro You Me At Six I had a feeling that it would be a great performance. In contrast to last year’s three row’s of people, it is great to see a massive crowd of fans anticipating their stage presence.

As they got on stage and cheers erupted, they immediately bursted out into their first song, the crowd started going wild, and singing along to every line. It was a great experience to watch them live, and the amount of emotion that Josh Franceschi puts into singing is amazing. You Me At Six is definitely one band you don’t want to miss seeing live.

I don’t know where to start off while trying to explain Pierce The Veil’s live performance, because I feel as if phenomenal would be an understatement.

I had a chance to see them during Taste Of Chaos ’09 and they blew my mind away. Being a fan now, and with the recent release of Selfish Machines, I knew it was going to be a great show, but I didn’t expect it to be half as good as it really was.

After releasing the highly anticipated Selfish Machines on June 21st and getting great feedback, Pierce The Veil headed on the Vans Warped Tour.

Moments before Pierce The Veil went on stage, I looked back to see the endless crowd of fans excited to see their performance. To the second the intro began, until the point where the band started to go on stage, you could believe with your eyes, that everyone in the area was excited for Pierce The Veil to take the stage. As they rushed on and began with “Caraphernelia”  I began to feel a big grin spread across my face. The bass drum seemed to be controlling the beating of my heart, and I felt invincible. The crowd had lost it, and started a circle pit and sang-along to every word.

The rest of their set was mind-blowing. Pierce The Veil really understands how to involve the crowd, bringing a super energetic live show so that they can jump, sing, and dance along. Every single one of their shows seem to be a blast. Playing songs such as “The Sky Under The Sea” and “The Boy Who Could Fly” they picked out great songs to play for a summer tour as everyone seemed to be off their feet and having a great time. If you haven’t seen Pierce The Veil live yet, I urge you to do so, you won’t regret it, and personally, I think they’re one of the greatest bands to watch live.

Bring Me The Horizon

Bring Me The Horizon’s shows all seem to be energetic, powerful, with the crowd going crazy, and amazing pits. This is one band that successfully get the whole crowd moving and involved, with Oliver Sykes (vocals) constant commands to start a circle or mosh pit.

As Bring Me The Horizon got up on stage many girls – and boys started with their high pitched screams which seemed to almost blow my ear drums out. They started their set off by getting into the crowd and chanting “We will never sleep, ‘cause sleep is for the weak, and we will never rest, ‘till we’re all fucking dead”. This ended up in an amazing response from the crowd who started getting more energetic by the second.

Bring Me The Horizon never fails to play short of an amazing show, and attract a huge audience. It seemed that the Teggart/Main Stage for the most part of the day had a smaller crowd than the other stages, but at the end of the day as I walked to the rest area, many people started flooding out, and there was the faint murmur of “Bring Me The Horizon” coming from their mouth’s, and I had a feeling that it would be a great set.

They are definitely a band for all venues, arenas, indoor and outdoor. It seems that wherever they play, they’ll bring an amazing live show. If you haven’t already, you need to check out Bring Me The Horizon live.

Their new album “There Is A Hell Believe Me I’ve Seen It There Is A Heaven Let’s Keep It A Secret” is set to release in the US on October 4th 2010. Shortly after this they will be embarking on a worldwide tour.