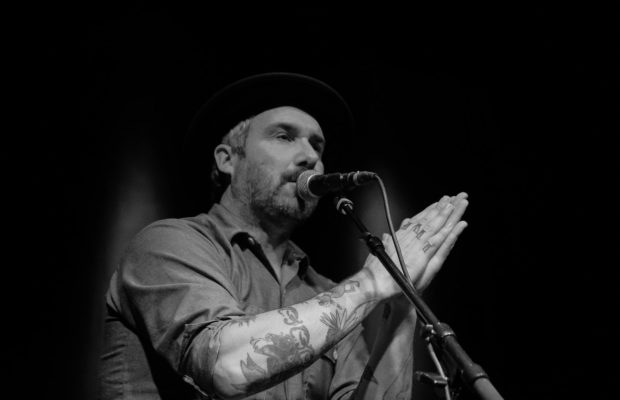 Iowa-based folk/soul/acoustic singer-songwriter William Elliot Whitmore made a stop recently in Louisville, KY to play to a packed house of excited fans. Having just released his latest album of covers entitled Kilonova, Whitmore played songs from it, including Magnetics Fields “Fear Of Trains” and Harlan Howard’s “Busted”.  He also played some older and original songs, such as “Civilizations” and “Mutiny”, and took some requests from fans in the crowd throughout the evening.  He started his set by thanking everyone for coming out and mentioning that it had been a long time since he had played in Louisville and how much he loves the city.  With only a banjo, an acoustic guitar and a kick drum on stage, he played each instrument with precision and had the crowd singing along to every song.  Whitmore is an incredibly personable performer, chatting with the crowd and telling them stories periodically throughout his set.  A few songs into his set, he told the crowd to give a hand to the opening artists Oscar Parson and Raye Zaragoza, saying that Zaragoza has a point of view and writes songs that matter.  He told the crowd about how Raye sings of the Standing Rock protests against the oil pipline and how the pipeline went through his grandmother’s land.  He tried unsuccessfully to fight against the pipeline for a couple of years, but made connections with other protesters and met good people with whom he made a show of solidarity.  He then got a bit nostalgic, reminiscing about his first ever performance in Louisville at a now closed venue called The Rudyard Kipling, saying what a shame it was that the venue had closed.  He then discussed a bit of the history of Headliners, saying that he always loves to know the history of things. He thanked everyone in the crowd for driving to get to the show this evening, that the time and money that people spent to see him play wasn’t lost on him, toasting the crowd with his favorite toast as of late- “May we get what we want.  May we get what we need.  But may we never get what we deserve.”   He then told the crowd how they were lucky to live where some of the best bourbons are made, with fans from the crowd bringing him shots of whiskey that he said he would sip on as not to forget the songs he still had to play.  He ended his set with “Old Devils” and “Our Paths Will Cross Again”, jumping into the crowd towards the end to sing amongst his fans.  It was an incredibly fun and interactive night of music!