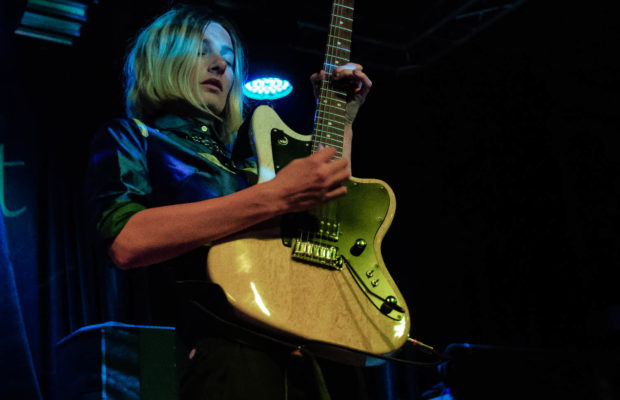 Los Angeles-based garage rock band Slothrust, currently on tour in support of their latest album The Pact, performed recently in Louisville, KY to a packed venue of fans.  As the lights dimmed to signal the start of their set, the crowd cheered and clapped as the band stepped onto the stage.  Singer/guitarist Leah Wellbaum, bassist Kyle Bann and drummer Will Gorin got the crowd going with their fun and instrumental song “Surf Goth”, setting the energy for the rest of their set.  With the crowd and band in high spirits, they continued to perform a variety of new and older songs, including “Rotten Pumpkin”, “Peach”, “Birthday Cake”, “Like A Child Hiding Behind Your Trombone” and “7:30am”.  They also performed a few covers including “Sex and Candy”, “Every Morning”, “I Want It That Way’ and “My Own Worst Enemy”.  The trio was having a lot of fun on stage together, smiling often and engaging the crowd.  Wellbaum would often stand at the edge of the stage and play her guitar directly to the fans, who were delighted by the special attention.  The band ended their set with the song Planetarium from the new album, a song which features Bann’s first bass solo on a song.  It was obvious that he was enjoying and having fun with the solo as he stood at the front of the stage with a smile on his face as the crowd cheered him on.  They then briefly left the stage before coming back out for two more songs.   They started the encore with “Horseshoe Crab”, a song that has become a crowd favorite.   Ending the set with “Crockpot”, they left the stage in a roar of applause.  Slothrust is a dynamic live band and gave their fans a fun night of music.  Philadelphia rock band Mannequin Pussy and local experimental indie rock band Quality Cable opened the show.