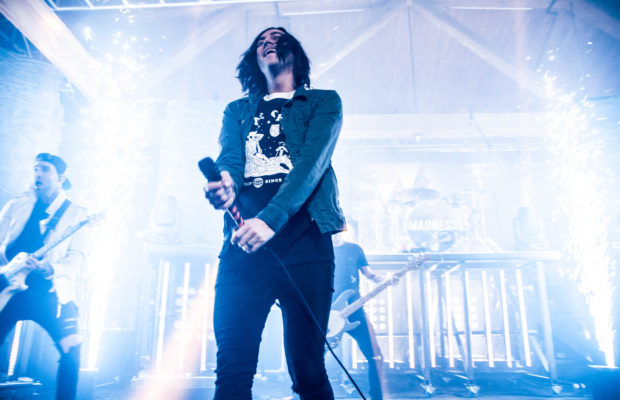 The End of the Madness tour stopped through Seattle last week, a hard-hitting lineup of four electrifying bands entertaining the audience throughout the entire night.

Taking the stage first was Texas-based band Waterparks, a trio of guys who have been gaining in popularity since the release of their debut full-length, Double Dare, earlier this year. Opening with “Hawaii (Stay Awake)”, off of Double Dare, their set was equipped with witty banter from lead singer Awsten Knight, going on about the current cold weather sweeping through Seattle and his inability to stop cursing even when young children are watching in the audience. Playing other tracks such as “Stupid For You” and “Royal”, Waterparks’ set proves why they are an up-and-coming band to watch out for. With high energy material and infectious personalities, it seems as though they gain new fans wherever they go.

Up second on the lineup was Australian band Tonight Alive. Playing songs off of their old and new albums including “The Ocean”, “Listening”, and “The Other Side”, Tonight Alive proved once again why they continue to be one of the most talked about bands in the scene. Vocalist Jenna McDougall is absolutely captivating with her powerhouse vocals and charisma that captures the attention of everyone in the room. Closing out their set with “Lonely Girl”, at which they had everyone in the venue raise their middle fingers high in the air, Tonight Alive’s a band you never want to miss seeing live when they come touring through your city.

Opening up their set with “Losing Myself”, State Champs gave it their all onstage during their eleven-song set. While they were performing in front of a rather calm crowd, many of those in attendance having never heard State Champs’ music before, they used their set time to their advantage, working to gain new fans by the time the last note hit. With a hard-hitting set list of tracks like “Shape Up”, “Perfect Score”, and “All You Are Is History”, they ended their set with their latest single “Secrets” that caused crowd surfers to emerge amongst the sea of people and glide over the barrier right up until State Champs exited the stage.

As if their lighting set up wasn’t enough, Sleeping With Sirens set out to put on an unforgettable performance. Opening with one of their most popular songs “Do It Now Remember It Later”, Kellin Quinn’s signature vocals mixed with the diehard SWS fans who sang at the top of their lungs from beginning to end. Playing a solid 16 song set of fan favorite tracks like “Congratulations”, “Fire”, and “If I’m James Dean, You’re Audrey Hepburn”, fans were definitely not disappointed with their song selection or performances each of the members on stage put on. The energy was high from the second the band hit the stage until they struck the last notes of “If You Can’t Hang”, sending many fans into hysteria, already wondering when Sleeping With Sirens would be back next.