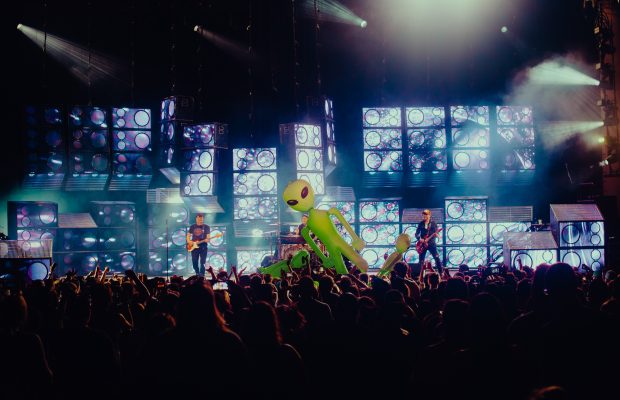 Blink-182 brought their 20th anniversary of “Enema of the State” through Noblesville, IN this week, bringing with it a legion of fans, as well as Lil Wayne and Neck Deep.

UK pop punkers Neck Deep opened up the night with a short but sweet set, and having not had the chance to see them since before their last album release, it was refreshing to see their newer songs like “Motion Sickness” and “In Bloom” live for the first time. It was a little unfortunate that Mark Hoppus did not come out on stage to sing “December” with them, but it didn’t make the bands 30 minute set any fun!

Lil Wayne took the stage next, turning the mostly pop punk line up into a full on rap concert. Full disclosure: I’ve never been much of a rap fan, and I only really ever listened to Lil Wayne when my friends played him in the car, or if there was nothing else to listen to on the radio. That being said, Lil Wayne put on a stellar set. I honestly have so much respect for big artists who play mix genre shows. It makes sense though, both Lil Wayne and Blink have been around since the early to mid 90’s–garnering fans of all ages over the last 20 years with their timeless music. Lil Wayne dominated the evening with a 34 song set list, playing hits such as “Don’t Cry”, “Lollipop”, and “Mona Lisa”, but also paying homage to other rap artists by covering “Bedrock” by Young Money, “Wasted” by Gucci Mane, and “Pop That” by French Montana.

Up next was the headliner, the final act of the evening, the one and only pop punk legends, Blink-182! A band that is credited by other pop punk bands for being the reason for their existence (Neck Deep included), a band that has gone through break-ups, and line up changes and still be relevant enough to almost sell out a massive amphitheater on a Wednesday night, that’s Blink-182. The first half of their set was the full play through of Enema of the State, which included hits “Dumpweed”, “What’s My Age Again”, and “All the Small Things”, followed by another set of newer and older singles, included an acoustic version of “Down”, “I Miss You”, and “The Rock Show”. The boys lead their way through the 22 song set with excitement and ease, and light bantering in between songs. If Enema of the State is 20 years old you’d never know because they made the songs sound just as good as they did when it first came out. Yes, the absence of Tom Delonge was felt on songs like “Aliens Exist”, but still having a chance to hear this iconic album played all the way through was incredible.

For whatever reasons you do or don’t like Blink in their current form, this tour should not be missed. This lineup is absolutely stacked, and it’s a great reason to revisit your emo childhood/adolescence, because if growing up means seeing iconic pop punk legends touring with one best rappers in the game, then we are absolutely here for it.