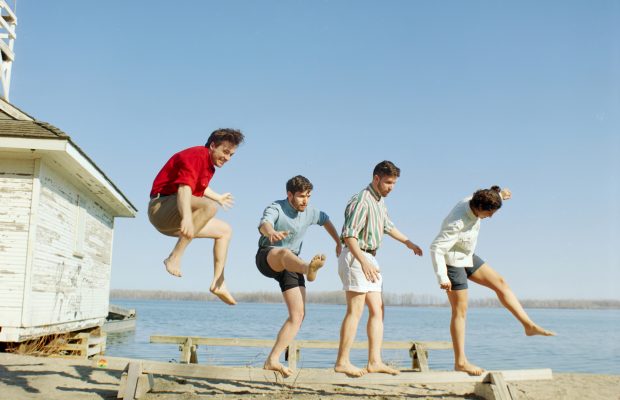 Basset is a young and rising all-acoustic group, consisting of vocalist Yasmine Shelton, songwriter/musician Sam Clark, and twin brothers Aaron and Noah Philipp-Muller.  While they draw on folk traditions from both sides of the pond with their heavy use of fiddle, mandolin and cello, their original tunes also take inspiration from old blues music (hear Shelton’s powerful vocals), 50s and 60s rock, and their shared classical background.  Their inventive style has earned comparisons to The Punch Brothers, Belle and Sebastian, and Of Monsters and Men. They recently released their debut single, “Dave and the Queen of Toronto”, and are set to release their debut EP in late June.

Basset often uses the old bluegrass method of gathering around a single microphone for their live shows, filling the room with their infectious love for each other and the music they play.  There’s never a dull moment between tunes either, as audiences get a glimpse into the charming – and at times ridiculous – antics of this tight-knit group of friends.  The band was formed in Winter of 2016 while all members were studying liberal arts at Victoria College, at the University of Toronto.  Sam and Aaron, both songwriters from a young age, were first year roommates and fast friends, frequenting open mics around the university with their acoustic arrangements, sometimes accompanied by Noah on the cello.  Still in need of a lead singer, Sam turned to Yasmine. He had been bewitched by her a capella rendition of Nina Simone’s “Feeling Good” at an open mic at the college, and they had since become good friends.

Now a quartet, the band’s first gigs involved playing background music at college functions; however, the goal was always to develop their own original music.  They quickly grew out of the university scene, and now, almost three years on and having left their college years behind them, the band has played some of Toronto’s premier music venues, including the Painted Lady and Lee’s Palace, as well as regular house concerts across the city.  They have appeared at the Summerfolk music festival and Heartwood Concert Hall in Owen Sound, and developed a supportive network of industry professionals who view the band as a young act brimming with promise, sharing stages with The Lifers, NEFE, and Citizen Jane.

The band is premiering their newest single “Waterloo” today.  “I wrote the lyrics to Waterloo about 2 years ago when I became aware of the opioid crisis” says Aaron.  “In the song I try to create a picture that the audience can visualize, mainly through a degree of specificity, as seen in the line about a Timmies in the outskirts of Waterloo, Ontario. I also tried to pit realistic images against metaphorical language, like the line ‘scream wrapped up in shivers’, which is meant to capture the experience of opioid withdrawal.  Musically, I tried to create 2 moods, where the verses and solo sections are powerful and inflamed, while the chorus is more wistful and frail.  I hope that the extreme emotional contrast is reminiscent to classic rock from the 70’s.  In the song, I try to introduce a very simple story about someone living on the fringes, whose existence is tied to something as unpredictable as a fluttering kite.  Ultimately, I want to portray an individual who is suffering in silence.  The lyrics in this song are meant to leave the audience with a snapshot, or even a story.  I hope the audience members want to punch the air during the verses and then feel a knot in their chest during the chorus.  The creative process in this song took the band to places I could have never imagined.  Through experimentation, Sam landed on the defining fiddle line you hear at the beginning, which I think gives the song these awesome creepy circus vibes.  Noah brought the syncopated cello hits to the table on the same day, which gives the piece a driving feel early on and ties together the guitar and fiddle”.  You can check out the song above and stay up-to-date with the band and all upcoming music and tour dates, as well as stream and purchase their music via the following links: