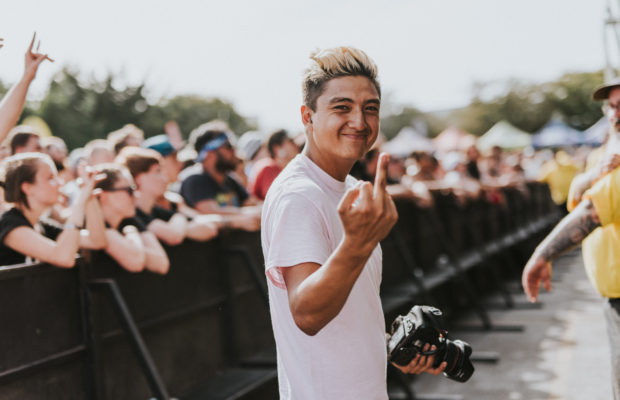 Recently, Ryan Watanabe’s work has been seen all over the social media accounts of bands such as Sleeping With Sirens, Oceans Ate Alaska, Yellowcard, Sum 41 and more. Earning himself a spot on the Vans Warped Tour this past summer that catapulted his career as a music photographer, Ryan is one of the fresh faces in the industry everyone should be watching out for. From his unique perspective behind the lens on backstage moments and on stage action, Ryan talked all about his shooting style, his lucky breaks, and why photographers should stop seeing each other as competitors and take time to learn from one another.

It all happened so fast that I didn’t see it coming. I started traveling from a young age, so having a camera was always important, I loved documenting memories. From there, I just kind of had a camera, a basic-beginner camera, but it came in handy. I go to college at a music school, so people constantly need head shots and live shots. As a result, I got kind of thrown into it, and I grew to love it. I loved capturing raw emotion and then using editing to give my spin on the moment. I loved being able to capture a person’s personality through a portrait. Live shows became almost like an adrenaline rush because everything happens SO fast, that it’s easy to miss a really special moment if your settings are off, if you’re not looking at the right place, or if you have the wrong lens on, but that’s our job and our challenge.

I always try to have fun. I know it’s a job, but it’s a fun one. If you see me shooting, you’ll often see me singing along and bouncing about because I really love what I do. I firmly believe, if you’re feeling the music, then you’re going to feel the timing and get the shots you want. Often, photographers don’t look like they’re enjoying themselves, but I personally think you should have fun with it. As far as an actual “style”, I’m not quite sure. I’ve been shooting so much, but for not very long and in that time, I feel like my style is constantly changing and evolving. I take a lot of influence from photographers that I look up to.

Canon bodies all the way! I’ve become an avid fan of the Sigma Art lenses. I think they’re incredible. If you look at my Warped Tour stuff, about 90% of them were taken with my Sigma Art 35mm and my Sigma 15mm fisheye. I had a couple Canon zooms, but I really prefer primes when I can. I love using a 35mm, it is by far my favorite focal length and my go-to lens for just about everything!

My very first show was just my roommate’s at our college, it was a Bob Marley Ensemble. My first photo pass and actual show was Gates. I had one prime lens, a fisheye, and a starter body. I remember so clearly that the photographer beside me had like 2 bodies, a bag of lenses, two flashes and I was just so nervous. The shots weren’t perfect, but they’re still some of my favorites. In the end, Gates used my shots so it was a lesson that gear is just a tool, it’s nothing if you don’t know how to use it properly. I really wouldn’t want to change anything, I like making mistakes so I can learn from them.

You just spent the entire summer out on Vans Warped Tour as a touring photographer for Oceans Ate Alaska. How did you get in contact with the band and end up on the road with them?

It was a lot of luck. When I saw the lineup, I sent emails to nearly every band/their manager with my portfolio and offered my services. I had never toured, I didn’t know anyone, and I didn’t have a connection or an “in” so I expected nothing to come of it. Luckily, James Harrison of Oceans Ate Alaska took the time to check out my portfolio. He seemed to really dig not just my live shots, but my portraits as well. We talked about the job and we seemed to be on the same vibe so he sent my stuff over to his band and that was that! Beyond lucky and forever thankful to those boys.

Over on your website, you’ve been sharing a lot of your Warped Tour coverage and photo galleries of specific bands from throughout the summer. What is the biggest lesson you learned while spending the summer on the road and making connections with those in the industry?

I learned work ethic is so important. I learned being personable is almost as important as your actual work. I would never leave my bus until every band’s photos were edited, uploaded and sent. There were some times I was working 6 bands a day, and so I’d be lucky to be out of my bus by 11. One of the best feedbacks I got back from Sirens was that they not only enjoyed my work, but they liked how quickly I got them their photos. As far as being personable, I wanted to be friends with the bands I worked for. I feel that the more comfortable and familiar a band is with you, the more comfortable they’ll be with you on stage, around their gear and with you being backstage. I think it allows them to let their guard down with your camera around because they feel more comfortable with you. It allows you to read situations, like knowing when not to be pointing your camera in their face backstage. I would spend time with my bands before every set and I would always try to hang out after the days were through and talk about life, and things other than music for a bit.

Is there any advice you would give to photographers who are looking to begin touring in the future?

Shoot a lot, be prepared for anything and don’t take criticism personally. The bands are employing you, and although it is your art, it is important to remember that you’re working for their image and that’s more important than your personal aesthetic. A lot of that is who you work for, if they chose to hire you, they did it because they like your style so they do trust you, but if they have a suggestion, take it as a challenge and as something you want to work on.

Like I said earlier, cameras are just tools and you have to know how to use them. Better equipment does help, but you need to find out what works for you. I brought out some L glass lenses which some people consider “better” and I originally used them, but once I started using my Sigma Art lens, which is nearly half the price of the L’s, I fell in love with it and used it for almost everything. More money isn’t going to make you a better photographer, but if you’re at a professional level, you should work with equipment that is also at your level.

I’m really proud of my work with Oceans Ate Alaska. They were the band I rode with, worked with day one, and they’re the band I can see the most growth in my photos because of that.

Especially these past few years, the amount of photographers in the music industry has increased. Do you try and separate yourself from the group to stand out or is it something you don’t think about?

I try not to think about it as competition, I try to embrace it as a growing community. I didn’t join this business intentionally, like with a goal to be someone because of someone, I did it simply because I really love it. I saw people not like competition amongst photographers and would become territorial, and I think that’s a real shame. Bands hang out with other bands, bands watch other bands, so I think photographers should hang and learn from other photographers. A lot of the time I’m editing for hours because our work comes home with us, it’s not over when the band’s done playing. So on tour, I’d always try and offer other photogs/videographers to just chill and edit, listen to music and drink some beers. For example, I had never really done video, but some of my best friends were videographers and they taught me how to use Adobe Premiere for my videos. I believe we should create together and grow together.

Be ready for anything. Whether it’s during the actual shoot, or working with management or the band, you may be asked to step outside of your comfort zone and that’s definitely okay. If you stick to the same routine, same shots, same edits, then eventually you’ll get bored of your own work. Don’t be afraid to change up your game. Don’t be afraid to step outside of your “aesthetic”. Things can happen really fast in this industry, and they can also move really slow. Just be ready. For example, because I don’t work for a publication, I would always struggle to get photo passes for touring bands stopping through Boston, so there was a period where things were really at a plateau. But then, not long after, I was on Warped Tour! Crazy things happen, don’t stop trying and never let someone stifle your creativity.

Photo of Ryan by Luis Velez