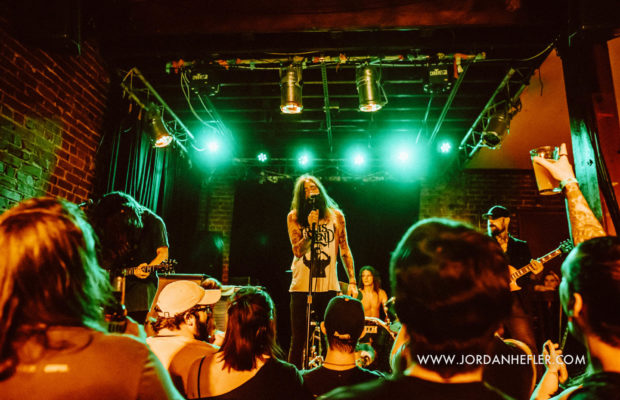 To Speak of Wolves

July 18th at the Spanish Moon was a heavy hitting night for bands He Is Legend, Islander, To Speak of Wolves, and Bad Seed Rising to roll through Baton Rouge, Louisiana. Fresh off one of the first dates of the “Hot Like Sauce” tour, Maryland rock band Bad Seed Rising kicked off the show with lead singer Francheska Pastor’s powerful vocals and stage presence setting the tone for the night. Bad Seed Rising has previously graced the cover of Stitched Sound and hasn’t seemed to slow down in terms of rising to the top since then. The band’s musical maturity is ever climbing and their genuine excitement to be on stage makes each performance unique and electric.

Hardcore act To Speak of Wolves was up next, unveiling some of their new songs off of their heavily anticipated new album Dead in the Shadow. The small stage was no obstacle for the band, as they were still able to thrash around and deliver an incredibly energetic set ending with lead vocalist Gage Speas hopping onto the shoulders of those in the crowd. Although some of the songs were unknown to the audience due to the concert being just a few days shy of the album release date, the crowd seemed receptive and engaged as ever.

The South Carolina rockers in Islander had everyone in the venue bobbing next. The band’s punk sound fused with nu-metal elements gave them a unique edge to the night in terms of differentiating themselves from the rest of the lineup. Their heavy rock is intertwined with emotionally charged lyrics spouted in rap-like phrasings, reminiscent of bands such as Linkin Park and Issues. The performance was definitely one that the crowd was invested in as they screamed all the words to the songs along with the band. A highlight of the night for me was when vocalist Mikey Carvajal told the crowd “give this photographer something to remember!” and pulled me on stage to snag a few shots. They definitely kept their word on that and gave the crowd something to remember.

Closing out the night was headliner He Is Legend, who has such a diverse range of sound in their repertoire. Psychedelic sounds, southern rock sounds, elegant and mellow sounds- the band covered it all during their set and got the crowd moshing by the end of the night. One minute they were pounding out a heavy southern rock infused tune with the drummer spitting water up into the air, then the next minute they were celebrating guitarist Adam Tanbouz’s birthday on stage by letting him blow out the candles on what looked to be a Little Debbie Cake. He Is Legend is never in any shortage of entertainment value on stage, and the diverse nature of entertainment given by all the bands on this tour made it one that could (and should) be enjoyed by anyone!