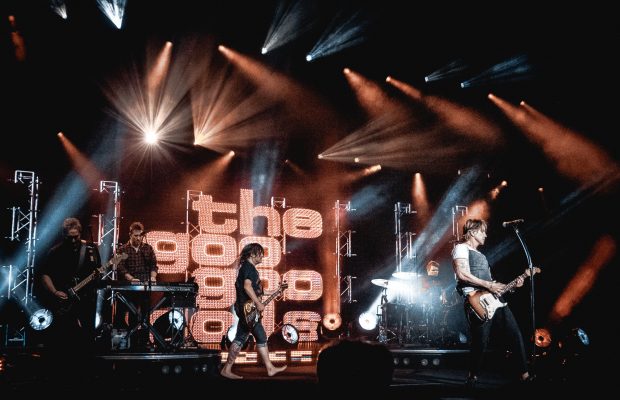 When the Goo Goo Dolls and Train announced their co-headlining tour earlier this year, I was very excited to see two of my favorite 90s bands on one stage at the almost sold-out DTE Energy Music Theatre.

After an opening set by soul singer Allen Stone, the Goo Goo Dolls took the stage and everyone was immediately out of their seats singing along to “Stay With You.” The set that followed was a great mix of songs spanning their career. Fans were treated to a lot of the singles, which was to be expected for a co-headlining show.

During “Black Balloon” the DTE Energy Music Theatre was filled with bouncing black balloons. After playing a stripped-down version of their hit single “Name” they performed the title track  “Miracle Pill” off their upcoming album, which will be released on September 12th 2019. Make sure to check it out when it gets released.

Bassist Robby Takac, performing barefoot, took lead vocals on a couple of songs, including “Free Of Me.” After they finished their set with”Broadway” they left the fans in the audience wanting more. The band will be back on tour this fall in support of their new album. Check out the tour dates here and make sure to catch them when they come to a city near you.

Setlist:
Stay With You
Big Machine
Slide
Rebel Beat
Here Is Gone
Black Balloon
Free of Me
So Alive
Name
Miracle Pill
Bringing on the Light
Over and Over
Better Days
Iris
Broadway

Up next were Train, who opened their set with “Calling All Angels”. Just like the Goo Goo Dolls, their performance relied heavily on hit singles and covers. During “Bruises” they were joined by opener Allen Stone and the crowd was loving it.

It would not be a true co-headling show without both main acts on one stage at the same time, so naturally, Johnny Rzeznik of the Goo Goo Dolls joined them on stage for a great rendition of “American Girl“. They finished with probably one of their biggest hits “Drops Of Jupiter” and everyone at the DTE Energy Music Theatre left happy and very satisfied that evening.

Setlist:
Calling All Angels
50 Ways to Say Goodbye
If It’s Love
Get to Me
Save Me, San Francisco
Angel in Blue Jeans
Bruises (with Allen Stone)
Meet Virginia
American Girl with Johnny Rzeznik of the Goo Goo Dolls (Tom Petty and the Heartbreakers cover)
When I Look to the Sky
Marry Me
Under Pressure (Queen cover)
Drive-By
Hey, Soul Sister ( with snippets of Drake’s “In My Feelings”)
Play That Song
Heartbreaker (Led Zeppelin cover)
Drops of Jupiter