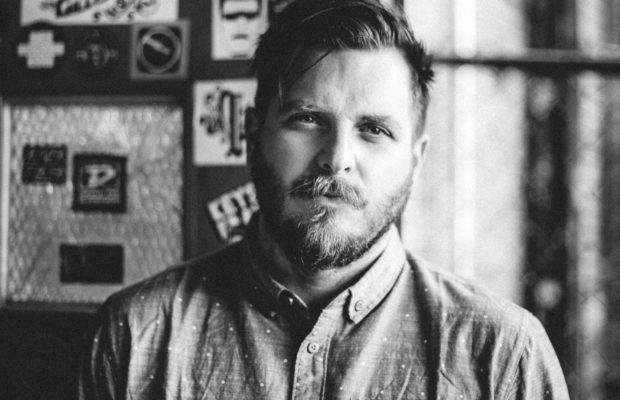 Thrice frontman Dustin Kensrue has been doing solo acoustic covers for years, but for a little over a year he has been promoting his latest album Thoughts that Float on a Different Blood. We caught up with him on his stop in Baton Rouge a few weeks ago to talk about life on the road and what inspired him when recording this latest album.

You recently released a new album chock full of live covers. What inspired the title Thoughts that Float on a Different Blood?

It’s a line from a CS Lewis novel, called Out of the Silent Planet and I’m kind of taking it and putting it in a slightly different context. The way I’m using it is this idea of when I’m covering a song, it feels in a sense that I’m inhabiting someone else’s space and their way of thinking and viewing the world. There’s just something very different about playing a song someone else has written vs. a song you’ve written. I find it very interesting to take it and interpret it and I try to do it in a sense where I give it a different take. I like to see what it looks like when I’ve ingested it instead of just “hey let me play you this song.”

How did you go about deciding which songs to release as covers on the album?

Some were ones that I’ve done for a while, but that lends itself more to the question of why did I choose the songs. Part of it is that I’m usually looking for something that I can really push the dynamics on live because it’s just me and an acoustic guitar. There are a lot of songs that I really love that wouldn’t be super exciting or interesting to cover. Like it might be great when you’re at a bar eating or something, but as a show it might not be super exciting. So I try to push some songs to be really quiet and then really big and not every song I can find the space to do that with. I just really am looking for something a bit different. Case and point is “Wrecking Ball”, which kind of gets dismissed as some pop song, but all those pop songs are written by teams of writers but because there’s a lot of backlash people are like ehhh. But it’s a really great song and I like to do stuff like that.

Did the process of choosing and stripping other people’s songs down to the bare bones teach you anything new about your own musical style?

I’m not sure if there’s anything I can point to, but I think it’s always a good exercise to do that. You end up studying the way they’re structuring the song together, and composition is artistically always my strong point whether it’s visual or with music. I feel like I’m able to look at something and move it around and figure out the right way to crop it or add things, so for me it’s really good practice to do that with other people’s songs.

What about recording the album live?

Thrice has two live records that are actually really live, which is really rare. Most live records are just recorded later, but we kind of like the idea of just leaving it raw. So same with this live one, we like the flaws. Something that bugs me the most about this one though is the way it’s tuned. I think I had the capo too high and there’s this ringing note through it that drives me nuts!

As a songwriter yourself, lyrics seem to play a pretty important part in what you put out. Are there any covers on your new album in particular that really resonate with you lyrically?

Some are less than others, but one of my favorites is Leonard Cohen’s “Dance Me to the End of Love” it’s a phenomenal song. I think he’s a genius lyrically. Counting Crows “Round Here” is also a favorite one. And “Down There by the Train” is one of my favorites too. I mean, something that was interesting was that I didn’t know all of the lyrics of “Wrecking Ball” when I started exploring playing it, and I kind of discovered the song in a different way when I was sitting down learning it. I always thought she said “all I wanted was to break you off” and it’s “all I wanted was to break your walls” and I was like ohhh that sounds so much deeper and less out of place!

You’ve been releasing music under your own name for a while, but you’re still also active with your band Thrice. How do you balance staying freshly creative with both projects?

They’re both just very different endeavors in the sense that a lot of solo stuff just naturally wouldn’t lend itself to being a Thrice song. Thrice is really really collaborative, so the solo stuff is just a very different process with me taking it from start to finish.

What are the advantages/disadvantages to touring by yourself vs. touring with your band?

You can get away with a lot less: All the guys playing the show and our tour manager and merch person roll pretty light. We just have a guitar each and it’s a lot simpler in that sense. It’s a more relaxed feeling overall. Nothing is ever getting too loud or intense. It’s just not as physically demanding and in general a lot more relaxed and simple, but not necessarily better. Even on stage it’s a very different vibe and mood than a Thrice show. In a smaller club it’s a bit more interactive and lighthearted.

Photo and interview by Jordan Hefler