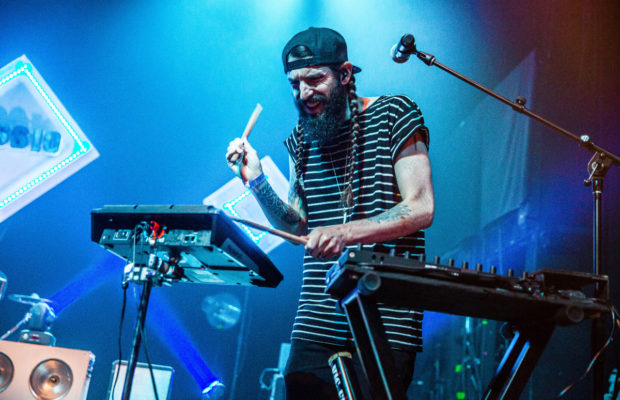 The sun was shining bright and the temperature had peaked over 70 degrees for the first time in a while. New Yorkers were brushing the dust off their shorts and rummaging through their closets to find their sunglasses. Outside the Gramercy Theatre on 23rd Street, fans were lining up to see Advanced Placement Tour. The tour, sponsored by Sirius XM, showcases three of the hottest up and coming bands on a full nationwide tour which was hitting New York City on Monday. The packed lineup featured 888, Coast Modern and Missio and they definitely did not disappoint.

Hailing from the mountains of Denver, Colorado, 888 started off the show. Their rip roaring energy soared throughout the venue with their in sync head banging. Drummer, Danny Cooper, was a favorite to watch with his insane energy behind the kit and crazy hair flips. The band began their set with their hit “Gold” and filled their 45 minute set with songs both new and old, mainly from their 2015 EP Critical Mistakes. Before parting ways with the Manhattan crowd 888 concluded with the title track from their EP and then ran into the crowd for the closing moments. Initially it was just lead vocalist Danny Stills who brought his drum into the crowd, but not before long the remaining band members had created a drum triangle in the middle of Gramercy Theatre. The crowd was entranced, phones out, recording the entire scene. 888 really set the mood for the night and it was full of energy.

Coming from the palm trees and blue skies of Los Angeles, Coast Modern was no stranger to the summer weather in the city that day. Inside the venue, the band lined the stage with large plants and favored warm tone lighting to mimic the aesthetic of their hometown. They opened their set with “Going Down” and instantly the crowd was feeling it. People were dancing and singing along and the smile on lead vocalist, Coleman Trapp’s face said it all. The bands 45 minute set was a wild ride featuring “Tiny Umbrella”, “Comb My Hair” and their hit “Guru”. Much to the crowd’s dismay, the bands 45 minute set flew by and not before long Coast Modern was saying goodbye with their hit “Hollow Life”.

After all of the gear was cleared from the stage, three diamond shaped lights stood in the middle of the stage, accompanied with a single drum kit and two keyboards. The rather simple stage setup belonged to Austin, Texas based band Missio. The young band got their feet wet on their recent tour with K. Flay in the Fall and were back for more, this time to headline. With only three released songs on their Spotify, Missio’s set was more of a showcase of their talent than anything else. The band explained that they have a wide range of song subjects ranging from their certified bop about “killing Darth Vader with my mother fucking kick drum” to their more serious subjects that come from a darker place inspired by their struggles with addiction. It was a true treat to see such up and coming bands take such a powerful stage presence. Each of these groups promises a strong future for themselves and they made at least one new fan last night!