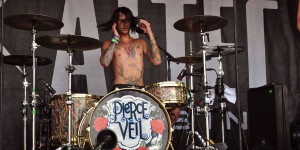 I don’t know where to start off while trying to explain Pierce The Veil’s live performance. I’m not sure how to describe it because I feel as if phenomenal would be an understatement.

I had a chance to see them during Taste Of Chaos ’09 and they blew my mind away. Being a fan now, and with the recent release of Selfish Machines, I knew it was going to be a great show, but I didn’t expect it to be half as good as it really was.

After releasing the highly anticipated Selfish Machines on June 21st and getting great feedback, Pierce The Veil headed on the Vans Warped Tour.

Being the odd-ball that I am, I did my best to ignore all the comments about Pierce The Veil’s performances at Warped Tour 2010, just so I could be surprised with the songs they played, and what their live performance would be like.

Moments before Pierce The Veil went on stage, I looked back to see the endless crowd of fans excited to see their performance. Rhe second the intro began, until the point where the band started to go on stage, it was easy to tell that everyone in the area was excited for Pierce The Veil to take the stage. As they rushed on and began with “Caraphernelia” I began to feel a big grin spread across my face. The bass drum seemed to be controlling the beating of my heart, and I felt invincible. The crowd had lost it, started a circle pit and sang-along to every word.

The rest of their set was mind-blowing. Pierce The Veil really understands how to involve the crowd, bringing a super energetic live show so that they can jump, sing, and dance along. Every single one of their shows seem to be a blast. Playing songs such as “The Sky Under The Sea” and “The Boy Who Could Fly” they picked out great songs to play for a summer tour as everyone seemed to be off their feet and having a great time. If you haven’t seen Pierce The Veil live yet, I urge you to do so, you won’t regret it, and personally, I think they’re one of the greatest bands to watch live.

If you haven’t already, you need to check out their new album Selfish Machines, which can be purchased on iTunes and in your local CD stores.