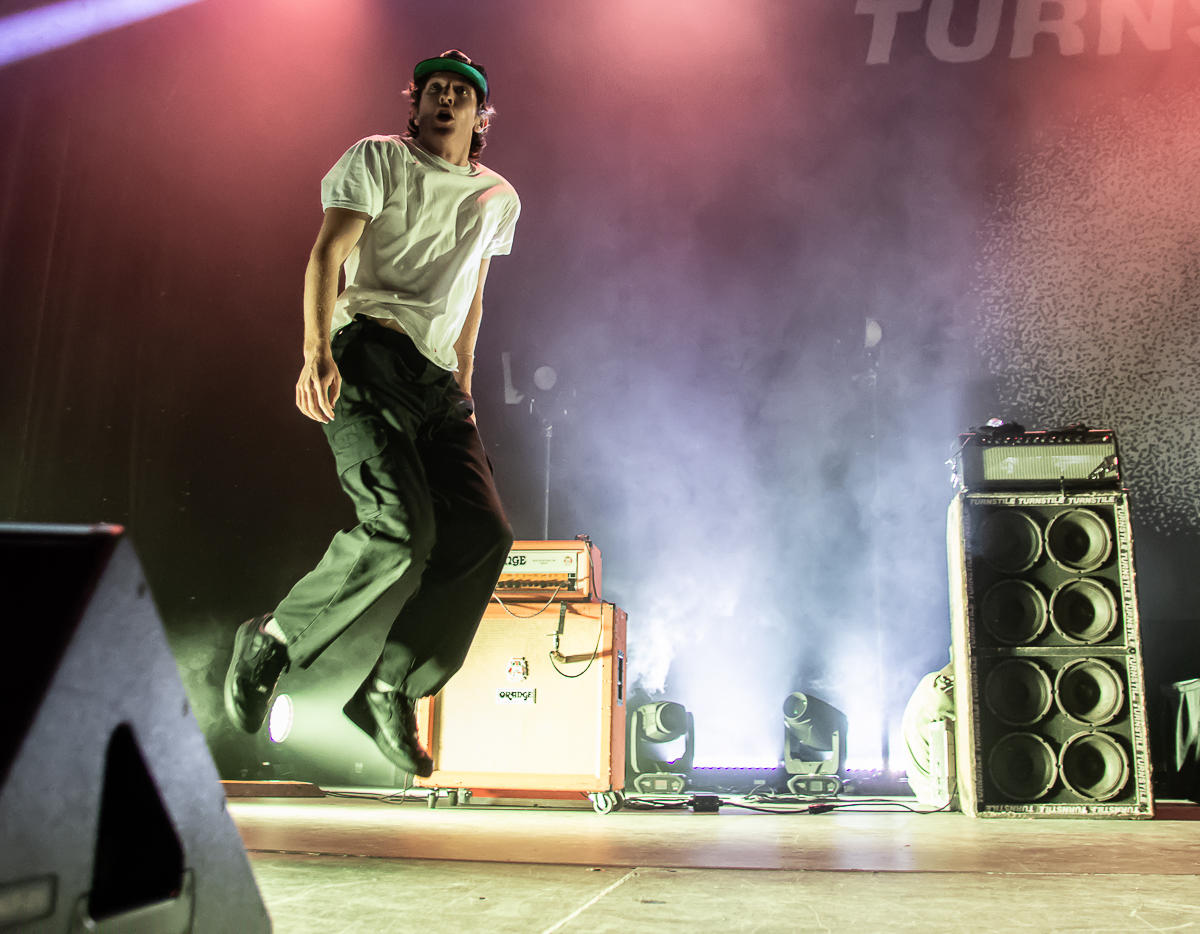 Turnstile with JPEGMafia and Snail Mail

Baltimore hardcore punk band Turnstile brought their current tour to Louisville, KY on October 21st to a sold out crowd! I could feel the excitement and buzzing energy in the air as soon as I entered the venue. Although I arrived a bit after doors, I have no doubt there was a line of fans waiting for the doors to open in order to secure their spot at the barricade. Opening the show this evening was New York City based indie rock artist Snail Mail, the solo project of Lindsey Jordan. As she and her band came out onto the stage, each lined up next to each other across the stage, she joked about how this was the first time they had been on the stage like that. She then laughed about how she got confused at first as to which microphone was hers! Starting the set off with “Pristine” from her 2018 album Lush, she and her band performed several tracks from the album, such as “Speaking Terms”, “Heatwave”, and “Full Control”. Many songs were also performed from the latest album, 2021’s Valentine, such as “Ben Franklin”, “Automate”, and “Headlock”. Jordan has grown a large and loyal fan base since starting her project in 2015, with many in attendance this evening cheering and singing along to her set! Laughing and cutting up with each other on stage and chatting with the crowd throughout the set, they ended their set with “Valentine” and definitely got the crowd warmed up for the evening!

Next up was Los Angeles rapper, singer, and record producer JPEGMafia. Having released music under the moniker JPEGMafia since 2015, he has released a variety of mixtapes, a collaborative EP with fellow rap artist Freaky, and 4 studio albums, and has cultivated a wildly passionate fan base. As he came out onto the stage, the crowd went wild! Starting his set off with “Jesus Forgive Me, I Am A Thot”, the crowd was singing along at full volume from the first note, with their hands in the air. He was super high energy throughout his set, dancing across the stage and, on several occasions, either jumping off the stage to stand at the barricade, or going directly into the crowd. He was very engaged with his fans, much to their delight, and the energy and love was reciprocated by them singing along to every word and being visibly hyped through the entire set! The energy in the crowd was wild and fun. With a set list that included “HAZARD DUTY PAY!”, “NEMO!”, “Puff Daddy”, “I Cannot Fucking Wait Until Morrissey Dies”, and a fun cover of Carly Rae Jepsen’s hit song “Call Me Maybe”, it was a wildly entertaining set! He ended his set with a cover of Denzel Curry’s “VENGEANCE | VENGEANCE”, telling the crowd “Thank you so much for being here tonight!” and signing a couple of items for fans before ending his set.

Closing out the evening was Turnstile, with Whitney Houston’s “I Wanna Dance With Somebody” playing before they hit the stage. The band released their latest album GLOW ON last year and performed several tracks from the album, including “Holiday”, “Blackout”, “Don’t Play”, “Underwater Boi”, and “Mystery”. They performed some older tracks, as well, from 2018’s Time & Space and 2015’s Nonstop Feeling, such as “Real Thing”, “Big Smile”, “Moon”, and “Drop”. From the very first note these guys were pure energy, with singer Brendan Yates jumping around the stage and engaging heavily with the crowd from the first note. Yates, drummer Daniel Fang, bassist/vocalist “Freaky” Franz Lyons, rhythm guitarist/vocalist Pat McCrory, and touring lead guitarist Greg Cerwonka also engaged with each other on stage, which just fed into the energy of the crowd! During a couple of moments in the set, Yates stood up on the drumming platform and performed on a drum pad in synch with Fang’s drumming, which made for a fun moment! Towards the end of the set, Fang gave the crowd one heck of a drum solo! With plenty of moshing and crowd surfing adding to the fun energy of the evening, the band ended their set by setting off confetti cannons during their closing song “T.L.C (TURNSTILE LOVE CONNECTION)”, which is always quite a sight to behold! It was a super fun evening that I am sure many fans won’t soon forget!