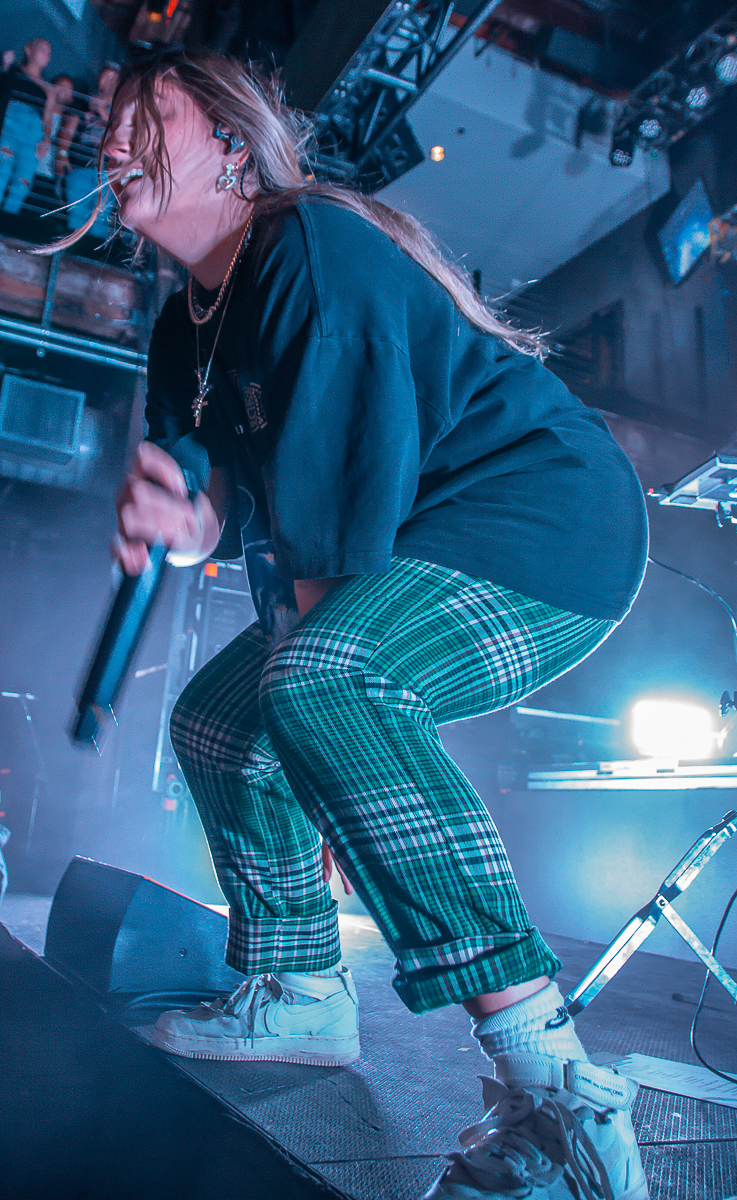 There is something really amazing about attending a nearly sold out show and feeling the joyous energy radiating from the fans. This was the case on October 13th, when Chelsea Cutler performed the first night of When I Close My Eyes Tour Part Two in Louisville, KY.  I arrived at the venue well before doors opened and there was already a sizeable crowd present, with many of the fans donning tour merch they had bought this evening in a show of support and love for Chelsea. Opening the show this evening was LA-based singer, songwriter, and multi-instrumentalist Arden Jones. The thing that really struck me about him was his sincerity and genuine warmth and gratitude for everyone who was there this evening and watching him perform. He also played the ukelele on a few songs, which was super fun! Although he made his debut in January of 2021, he has been cultivating a growing fan base ever since and really wowed the crowd this evening. During his first song and a bit of the second song his microphone cut out, but he didn’t miss a beat and kept singing and engaging with the crowd who cheered and showed their support. He later joked with the crowd “Wow! I got muted there for a minute! Thanks for being so supportive!”. He also told the crowd that this was his first time in KY and that he loves it out here. Performing his hit track “Parallel Parking” and “Mr. Sunshine”, amongst others, he really had the crowd singing and dancing along. He ended his set with “Not Afraid At All”, calling it one of his favorite tracks he’s ever written. Next up was Michigan-based producer and electronic artist Ayokay (Alex O’Neill). Having released several singles, 2 EPs, and a full length album, 2018’s In the Shape of a Dream, Ayokay was having a lot of fun on stage with the crowd, who were having a great time dancing and singing! While he did spend most of his set dancing and singing behind his keyboard, he came out onto the front part of the stage on a couple of occasions to really engage the crowd, much to their delight. He chatted with the crowd a bit during his set, saying early on, “It’s a pleasure to be here tonight on the first night of tour! Anyone else drinking tonight? Cheers to you! It’s the first night of tour and we are very happy to be here!”. He talked a bit about how Chelsea was a good friend and how he had first heard her on SoundCloud, loving what he heard, and talked her up to his management team who then brought her on! Singing a nice selection of songs, including a new song that has not yet been released, he also performed a couple of older songs for all of the OG Ayokay fans in the house!

Closing out the evening was Chelsea Cutler! It is easy to see the love her fans have for her, with their adoration etched onto their faces. Singing every single word to every single song, many of her fans resonate deeply with her lyrics. Singing plenty of songs from her latest album When I Close My Eyes, such as “Forever”, “Easy”, “When I Close My Eyes”, and “Without You”, she sang some older tracks, as well, including “The Reason” and “AF1s”. It is very apparent that Chelsea Cutler loves her fans as much as they love her. She chatted quite a bit between songs and addressed the crowd directly on a few occasions. Early in the set she asked, “How are you all doing? My name is Chelsea Cutler! Thanks for coming out!”. She went onto to talk about how crazy things are right now, especially with inflation and gas prices, and how grateful she was to everyone who bought a ticket and came out to see her perform. At one point she took a fan’s cellphone and took a selfie on stage, joking “I saw Harry do this”, which got a good laugh. “I like to have a fun and loose show. Turn around and smile at each other and make a new friend!”. Slowing things down a bit, she said that when she was at Lollapallooza earlier this year, she performed her song “Crazier Things” acoustically and really liked it and wanted to play it that way for us this evening. “All I need from you is to sing along!”. Leaving the stage briefly for her crew to set up a keyboard, she came back out and talked to the crowd about how during the pandemic she made an important distinction between her mental health and who she was as a person. That her lack of motivation and creativity was a part of her depression but wasn’t who she is as a person. That she was more than her mental health struggles. She then performed “Devil On My Shoulder”, saying how writing the song really helped her. Performing a three song encore this evening, she got the crowd hyped with “the lifeboat’s empty!”, “Mess”, and one of her earliest singles, “Your Shirt”. The crowd was left buzzing with energy long after Chelsea left the stage, with many fans milling around and buying merch. It was a fun night that will no doubt leave many fans hoping she comes back soon!