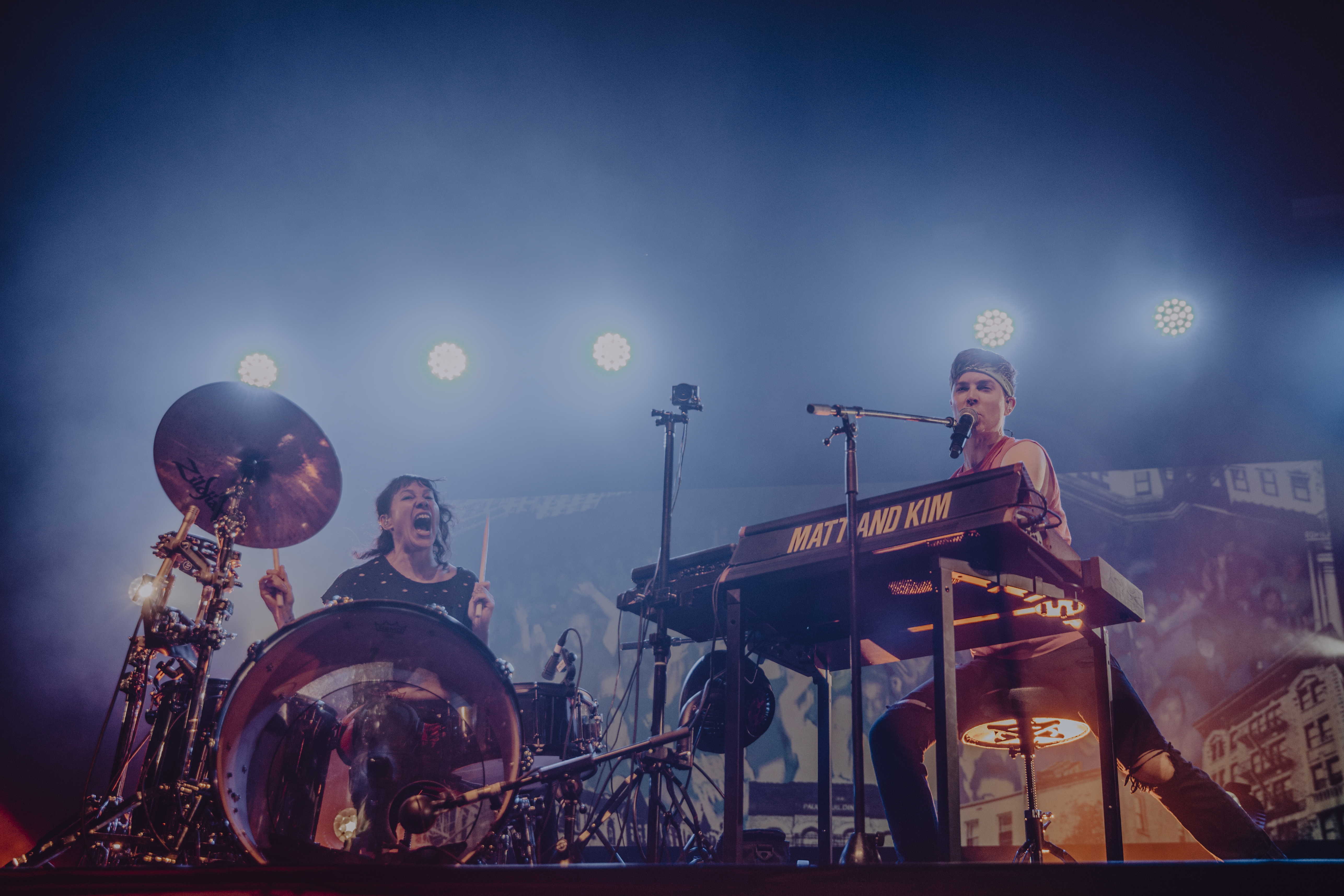 Matt and Kim with The Frights

There have been many scientific studies done regarding the question of how the music you listen to in your formative years lays the foundation for and shapes your future as an adult. For me, the music that I listened to in my formative years is without a doubt the reason that I am the kind of adult that I am. I was introduced to this eclectic and unique, what we would call “hipster” today, sound through a mixtape that my sister burned onto a CD before I was sent off to summer camp in 2009. The first track on the mixtape was called “Daylight” by a duo called Matt and Kim off of their album titled Grand that had come out earlier that year. The upbeat piano that kicks the song off immediately sparked my interest and I began to delve further into Matt and Kim throughout high school, using my iTunes gift cards to purchase all of their albums onto my hot pink iPod nano. When I was detaching from my incessant emo phase and love of bands like My Chemical Romance and Fall Out Boy, I was swallowing everything Matt and Kim had to offer, whole.

As I grew up and my music taste changed, the sound that Matt and Kim produce has stuck with me as the basis for all music that I play. And while I graduated from hot pink iPod nano to bright red iPhone 8 and switched from iTunes from Spotify, Matt and Kim were still at the top of all my playlists. Songs like “Don’t Slow Down” and “Good Ol’ Fashion Nightmare” quickly became my favorites and I learned every single word to every single song. Now, here I am as a post college working adult and I’m still geeking out over Matt and Kim.

Now that I’ve given you my entire life’s discourse, let me paint you a picture about November 24th’s Matt and Kim show at Terminal 5. It was freezing outside the Hell’s Kitchen venue and I was blowing into the air to watch my breath to try and pass the time until doors opened. The clock hit 7 and fans flooded into the venue, trying to get their spots closest to the barricade. Fans were already pumped and amped up for the show, bouncing around on the floor before the show was set to begin. Kicking off the night was surf rock band, The Frights, from San Diego, California. I had become a fan of The Frights while in college because their angsty lyricism juxtaposed with their bright and sunny sound seemed to really connect with me and watching them perform to an overexcited crowd of fans, who ate up every bit of what they had to offer was such a treat. They played some of my favorites including “You Are Going to Hate This” as well as their final song of the evening “Kids.”

The stage was being switched and prepped for Matt and Kim’s arrival. The sides of the stage were lined with old brownstone looking buildings that were meant to mimic the cover of their album Grand, which turned ten years old this year and hence, the reason why the duo was embarking on this current North American tour to begin with! Sunday night’s show marked the first of two hometown shows for the duo, as well as the final two nights of what they claimed was the greatest tour they had ever been on!

I stood in the photo pit waiting for the lights to dim. The iconic Matt and Kim stage setup was placed in the middle of the stage: a drum riser that placed Kim’s drum set and Matt’s keyboard next to each other, facing out into the crowd. Suddenly, the lights went dark and Matt and Kim ran onto the stage. Loud rap music was blaring, and confetti was flying as Matt threw t-shirts into the crowd, before both Matt and Kim took their seats behind their instruments and ripped right into “Daylight.”

The duo’s performance was split into two halves with an intermission separating each half. The first half of the evening’s performance was a run through of the entire Grand album, which was a real treat to see considering that, as Matt stated, some of the songs were ones that the duo had never played before and would never play again after this tour. The first half of the show was concluded with “Daylight (Outro Remix)”, before a brief intermission period.

The second half of the show returned to the typical, over the top, crazy energetic and wild party that I know every Matt and Kim show to be. The first song of the second half of the show was “Hey Now”, in which the Matt and Kim crew began launching blow up dolls and balloons into the crowd. Matt and Kim belted the words to their songs with such passion and energy that it was truly contagious, and it was impossible not to be smiling and dancing around inside the venue. The remainder of the setlist included “Get It”, “Silver Tiles”, “It’s Alright” and new songs “Go Go” and “Money.”

To say that Matt and Kim’s performance was killer and amazing would be quite the understatement, in fact, I’m not sure if there are adjectives that have been created yet, that would accurately describe the energy seen and felt at a Matt and Kim show. For that hour and a half that you are there with the duo, you are all treated as family. Matt and Kim shows are truly unique and powerful places and I’m always the first one to recommend attending to a show if you haven’t already!