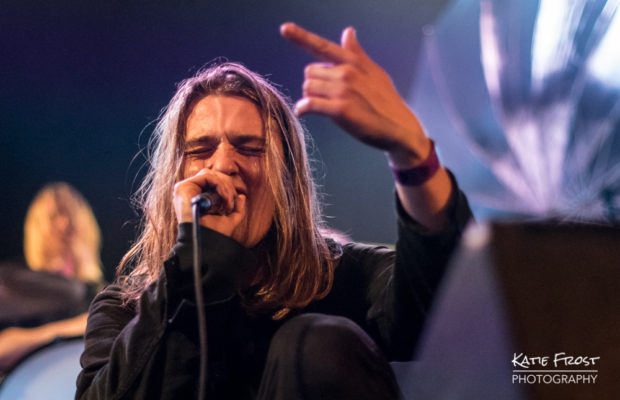 On Friday at 229 The Venue in London there was a celebration underway of 10 years of This
Feeling club night (www.thisfeeling.co.uk).

As well as live music from White Room and Broken Hands, the evening’s entertainment featured a DJ set by Carl Barât (from The Libertimes), and further DJ sets in the venue’s second room.

The first band to hit the stage were Brighton-based five-piece White Room who describe their
sound as “sky-gaze psychedelia and raucous distortion”. It seemed to go down very well with
the heaving crowd. When the sound inexplicably cut out shortly after the start of their last
song, the band continued unphased and lead the crowd in an acapella sing-along to Always
Look On The Bright Side Of Life. Normal service was soon resumed and the band finished their
set in triumphant fashion.

Next up, and keeping the British guitar-rock theme going, were alt-rock band Broken Hands. I
was lucky enough to meet the five guys from Canterbury ahead of the show for a quick
backstage photoshoot, the photos from which can be found along side our interview with the
band which will be posted at a later date!

Their stage set-up included some large photographer’s lighting umbrellas which created a
stunning back-drop for their set. Front-man Dale Norton used every inch of the stage and
certainly kept the crowd entertained as the band played tracks from their debut album
Turbulence.