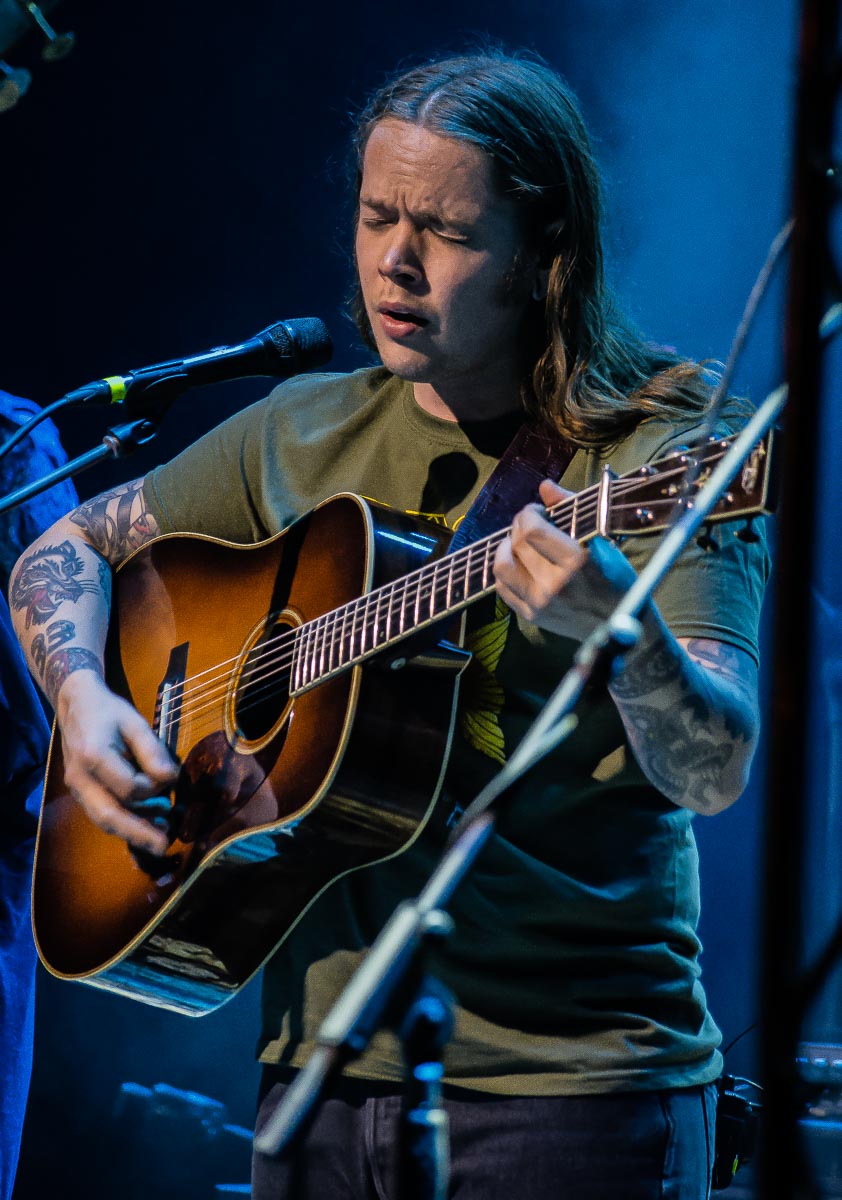 Bluegrass/Psychadelic Nashville musician William Apostol, better known to his fans as Billy Strings, has been taking the Bluegrass scene by storm since 2013 with his fresh take on the genre.  Having developed an ever-growing fan base over the years, he brought his live show to Louisville, KY recently for a two night run, the second night of which I was fortunate to catch.  As many times as I have covered shows at Headliners Music Hall, it is pretty rare that I have seen a line leading up to doors as long as the one I saw this evening.  With plenty of chairs dispersed throughout the line on this chilly Saturday evening, it was apparent that many of the fans had arrived very early with plans to camp out in their warm clothing in order to secure their spots by the stage.  Once doors opened, the crowd started pouring into the venue.  Sometimes with sold out crowds of this size, the mood in the venue can be rowdy, but the overwhelming feeling I sensed from those in attendance was one of serenity and fun.  Everyone at the venue was there to have fun, with many people smiling, laughing and chatting with each other in anticipation of the night ahead!

As Billy Strings took the stage this evening, he did so to the roar of cheers and applause from the crowd who were eager for the show to start.  The audience was also treated to legendary fiddle player Michael Cleveland joining the band on stage for the performance.  With no opening band this evening, Billy’s fans were treated to an evening of just he and his band playing a nice variety of songs that they proceeded to sing and dance along to.  The crowd was treated to a two part performance this evening, with the first set starting off with “Dust In A Baggie”.  Performing plenty of original songs such as “Likes Of Me”, “Doin’ Things Right”, “Taking Water” and “Dos Banjos”, in which he and touring banjo player Billy Failing both wowed the crowd with their dueling banjo skills.  The band also performed several covers during the set, including “Bird Song” (Jerry Garcia), “I Haven’t Seen Mary In Years” (Bill Monroe and the Bluegrass Boys), “Tipper” (Tony Rice) and “Black Clouds” (The String Cheese Incident).  They ended the set with another Bill Monroe cover, a live debut by Billy, of “I’m Going Back To Old Kentucky”.  After a brief intermission of sorts, the band came back out onto the stage for their second set of the evening, starting things off with a Bill Monroe cover of “Dusty Miller”.  Performing originals such as “Highway Hypnosis”, “Away From The Mire”, “Long Forgotten Dream” and “Fiddlin’ Around”, the band also performed two covers by The Stanley Brother’s, “I Only Exist” and “Nobody’s Love is Like Mine”.  They ended the evening with an encore of a Bill Monroe cover of “Roll On Buddy Roll On”.  Although he chatted a bit with the crowd throughout the evening, Billy Strings and his band allowed their music to take center stage.  The atmosphere this evening was one of jubilation, with the sold out crowd singing, dancing and having a great time.  It was a wonderful evening of music.